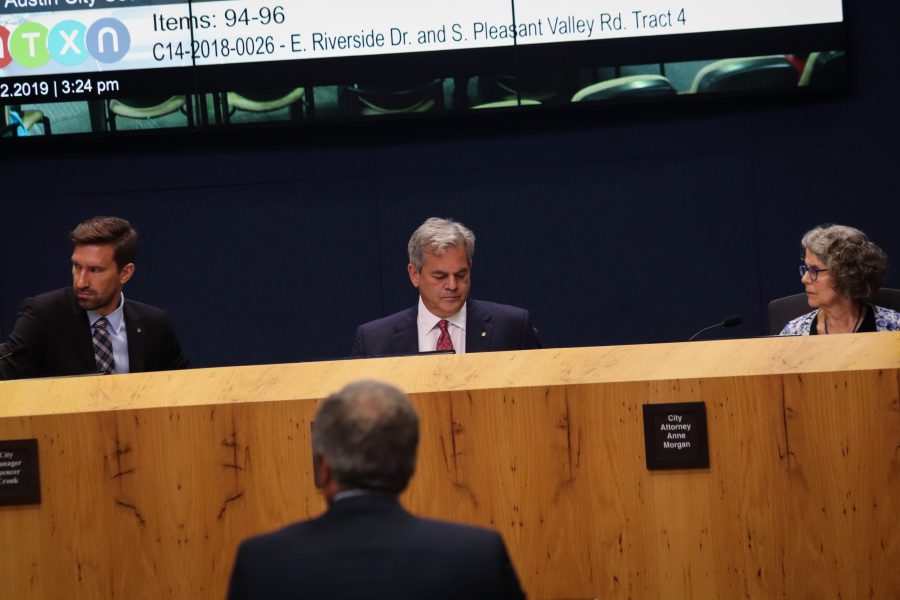 The Austin City Council voted Thursday to advance an ordinance allowing for redevelopment of student apartment complexes in Riverside to a third vote.

In a 6-5 vote, the council gave a second approval to the rezoning of 97 acres of housing into a mixed-use development, which will replace 1,308 apartment units in Ballpark North, Town Lake, and the Quad East, West and South — all mostly rented by students. A third vote will take place during the next council meeting Sept. 19, and the ordinance will pass if approved then.

The project will develop approximately 4,700 residential units, 600 hotel rooms and more than 4 million square feet of office and retail space if passed, according to the rezoning application. The project applicants have entered a restrictive covenant and said they will reserve 250 apartment units from demolition for five years, giving tenants time to adjust to the development and decide whether to stay or move out.

“There’s so many different scenarios of what could happen,” Mayor Pro Tem Delia Garza said. “If we don’t rezone it, there’s affordable market-rate housing now, but there’s no guarantee it will continue to be that. If we do, I appreciate the applicant adding the restrictive covenant, but five years really isn’t a lot.”

During the meeting, five of the council members said they did not approve of the ordinance because of worries about gentrification.

“I understand these apartments could be upgraded, and we’ve already seen that happen … but even with those upgrades, they’re still affordable,” council member Greg Casar said. “In this case, I don’t think (upgrading the apartments again is) the right thing to do.”

Council member Pio Renteria, who voted for the ordinance, said he disagreed with Casar and believes gentrification is inevitable.

“We think we will stop gentrification by not building, but it does not work,” Renteria said. “People are coming to Austin, and they’re going to outprice you. They have the funds to pay more. They’ll come after all the other barriers.”

“People who have lived in the area for decades are being forced out of their homes in place of expensive shopping sites and luxury apartments,” Gordon said. “With the plan, we would be taking away affordable housing from current students and replacing it with a sort of Domain, making the area no longer habitable for low-income students.”

Alex Meed, a public affairs graduate student who attended the meeting, said he will attend the next meeting in case there is another opportunity for people to speak out.

“I can't say 'no' to this project because this city is in a housing crisis,” Meed said. “But I hope we get more clarity on Sept. 19 on how the developers will protect both existing residents and future students. Otherwise, they'll be leaving a lot of folks without a place to live.”