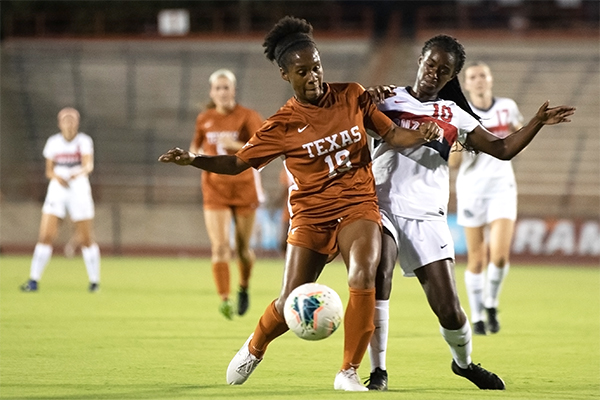 The No. 19 Longhorns looked to start the year off strong, but first they had to get past the Gonzaga Bulldogs.

In the early minutes of the match, the Bulldogs put constant pressure and controlled possession. Gonzaga’s early aggressiveness, highlighted by a 3-1 shot advantage in the first 11 minutes, paid off with an early goal coming from a deflection from Texas' goalie Savannah Madden in the 14th minute.

“They played great," Kelly said. “Their midfield was dominating at times, and they obviously put a lot of pressure on our backs. Credit to Gonzaga for that.”

For Texas, this seemed to be the wake-up call it needed to get going. It began with forward Sydney Nobles, who received the ball on the right side of the 18-yard box and turned to find a narrow gap in Gonzaga's defense at the 33-minute mark, giving her a goal in her first collegiate match.

The freshman from Southlake, Texas, talked postgame about the emotions of putting on the Texas uniform.

“Every time I put it on, I get more and more excited and it just becomes more real for me," Nobles said. “I just remember watching them when I was growing up and remembering thinking that I want to play for them, and now it’s my time.”

Following the equalizer, midfielder Julia Grosso was able to tack on two more goals, giving Texas a commanding 3-1 advantage heading into the second half.

However, the Longhorns once again opened the half a step behind, and Gonzaga made sure to pounce on the opportunity. Between the 59- and 67-minute marks, the Bulldogs scored twice and evened the game at three goals apiece.

Heading into the game, forward Cyera Hintzen had arguably the biggest spotlight on the team. The two-time All-American racked up three assists, but had yet to find the back of the net. That changed with nine minutes remaining in the match. When the Longhorns needed her the most, Hintzen sent a strike to give Texas the lead.

Right when it seemed like Texas had the game wrapped up, the Longhorns defense committed a surprising foul in the box with five seconds left, giving Gonzaga a penalty kick and a chance to extend the game.

Breaths drew quicker around Mike A. Myers Stadium as Madden readied herself for a chance to earn a victory in her first start. Able to anticipate Alaysia Lane’s movements, she dove to her left just as the ball rolled into her arms, clinching a season-opening victory the Longhorns.

Despite the win, multiple Longhorns believe that they can still get better.