Haus of Texas provides space for students to participate, learn about drag 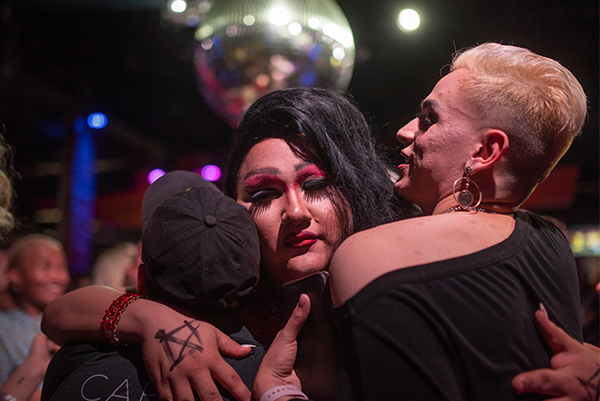 In the halls of Dobie Twenty21 Student Spaces, drag performer Celia Light saw potential. Surrounded by students interested in performing in drag, Light formed a family within the building. After months of giving makeup tutorials and attending each queen’s debut performance, the group has expanded outside of Dobie and is now an official UT organization.

Called Haus of Texas, the organization was founded by radio-television-film sophomore Ariel Juarez, one of Light’s “drag daughters.” Their goal is to provide an affordable, accepting and accessible space to any student interested in the art of drag.

Juarez, president of the organization, handles all booking inquiries and said the group will continue to provide tutorials as well as host trivia nights and movie screenings.

Additionally, the group will reserve rooms for queens to get advice from others to prepare for the organization’s bimonthly performances.

With an admission price of $5, Juarez hopes the student population will support the girls by attending and tipping.

“I want to prioritize tipping because the girls don’t get anything out of this,” Juarez said. “People need to realize it takes a lot to be a drag queen.”

For Juarez’s own debut as Fiji Dawson’nee, they spent upward of $200 on makeup, shoes and other necessities. In an effort to make the group more accessible, members will not be charged dues.

“If you’re going to be in drag, it’s expensive,” Juarez said. “It’s an investment. I’m not going to make anyone pay $20 for dues. That can go towards makeup or something else.”

Another expense for members may also be attending Austin shows, which Juarez said can sometimes cost $20 just for admission — and that’s if students can get in, as most shows are located in bars that only allow attendees over 21.

In an effort to continue to support local drag queens, some meetings will feature queens from the Austin area.

“(The local queens) have said, ‘For the night, you can book me for $50,’ but they probably cost $300,” Juarez said. “They’ve been so generous. I would love to give them their full price.”

Overall, Juarez said the goal is to provide a space for students interested in drag in any capacity, regardless of how experienced they may be.

Serendipity Ray, a drag performer, was a part of the original group at Dobie and is excited to bring the group to campus.

“We want to bring the same light and life to campus,” Ray, a radio-television-film and government sophomore, said. “My involvement was reactionary to the extreme levels of hate I had begun to see on campus, and I felt assisting in creating this organization would help.”

For Light, an international relations and global studies junior, the ability to help others is what she’s most excited about.

“It’s really fulfilling because the best thing you can do as a drag performer is encourage other people who genuinely have an interest, want to perform and make a name for themselves,” Light said. “That’s the most beautiful thing.”