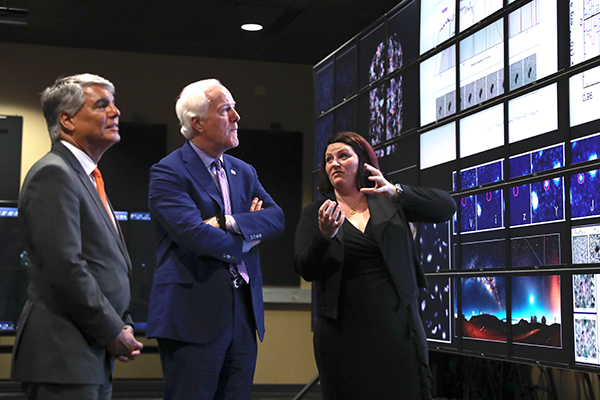 During the roundtable at the Peter O’Donnell Jr. Building, UT student veterans in STEM programs and representatives of NASA and Dell joined Cornyn and Fenves to discuss the act and share their experiences. The act, which was introduced in June, allows veterans up to $30,000 of G.I. Bill eligibility or an additional semester of study, if they are following a STEM degree plan.

“Before the passage of this bill, only three STEM programs at UT applied to this scholarship,” Fenves said. “Now, that number has jumped up to 25.”

The G.I. Bill was first passed to prevent another depression after World War II and provides educational assistance to veterans after they leave military service. The bill was updated in 2008 to provide further assistance to veterans with active-duty service on or following 9/11 by allowing them to transfer their academic funding to a family member if they are unable to use that money themselves.

Jeremiah Wells, one of three student veterans who spoke at the roundtable discussion, said he is an example of someone who relies on the existence of G.I. funding after leaving service to open up educational opportunities he otherwise would not have.

“Where I’m from, not a lot of kids had the thought to become a doctor,” said Wells, a neuroscience senior. “It was my military service that ended up showing me a path to med school.”

While presenting her doctoral research to Cornyn and Fenves, student veteran Rebecca Larson said her work demonstrates how her G.I. Bill funding allowed her to excel in a field she loves.

“My master’s thesis involved looking at this electromagnetic spectrum and estimating the distance of galaxies from us,” astronomy graduate student Larson said. “Now, I’m looking at finding where this process started.”

Larson and the other veterans said they struggled before coming to study at UT, and their military training ended up preparing them for the new challenges they faced as college students.

“I attended eight other universities before I came to UT, and I relied on faculty for all my research opportunities,” Larson said. “Being in the military taught me to adapt, to overcome and to look ahead of me to overcome hardships.”

Cornyn said he vows to use his seat in the Senate to ensure veterans are looked after even when their service has ended, and he plans to expand this funding to fields outside of STEM
degree plans.