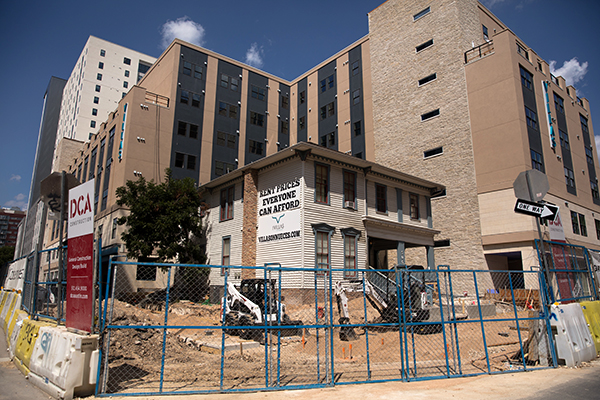 Brad Zucker is the developer of Zucker Properties, which manages the construction for several Villas complexes in West Campus, including Villas on Nueces. He said residents were supposed to move in Aug. 23, but delayed construction led to delayed inspections, which prevented the complex from being ready for residents until Sept. 7.

“We have a lot of really high-tech stuff in our building, and construction just took a little longer than expected,” Zucker said. “The people in the city department have been very helpful. I have no complaints about any of the work they’ve done.”

Villas on Nueces is a 99-unit complex located at the intersection of Nueces and 22nd streets. Computational biology sophomore Nhat Pham said he was informed on Aug. 19 that his move-in date had been pushed back to Sep. 7.

“We received an email that morning saying that there was a problem with the inspection and some delays in construction, that they had to move the move-in date back and that they’d waive all of our rent for the first month,” Phan said.

Kelly Brustein, head of operations for the Villas, said October rent was waived and residents will be given rent credits for the days they were not living in the complex. Residents also received reimbursements for Uber and Lyft, and they were offered a $200 per day reimbursement if they stayed in a hotel or $100 per day if they stayed with a friend, Brustein said.

“We apologize for the unfortunate situation, but we’re doing our best to ensure everyone is taken care of and accommodated,” Brustein said.

“It was a scramble to find a hotel,” Buche said. “We didn’t have that much time to find something.”

David Exiga, Buche’s roommate and a mechanical engineering sophomore, said the complex updated them twice on the status of their room and shared some photos of completed work inside the building with tenants.

“They were pretty nice about it,” Exiga said. “It does seem like they’re trying to do what they can to solve the problem.”

While Pham had doubts about the proposed move-in date because of exterior construction on the building last week, he has confidence in Zucker Properties due to their construction history.

“They seem quite confident that they are going to be able to finish on time, and I believe them,” Pham said. “They seem well-managed, and I trust them, but I’m just not sure.”

Zucker said although there have been hiccups in the construction process, the building is finalizing work and cleaning to prepare for students moving in on Sept. 7.