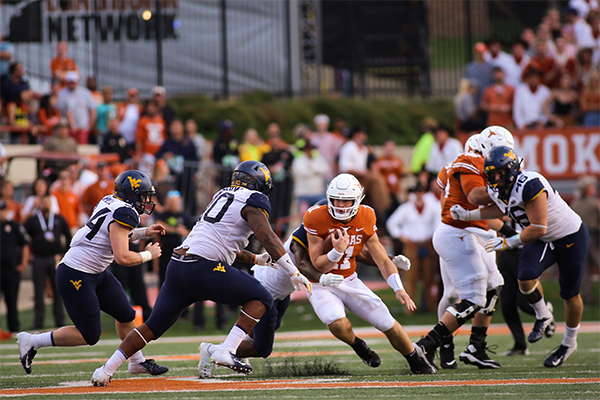 Texas Football has a perfect opportunity in front of itself. For the first time since 2010, the Longhorns are ranked in the top 10 in the Preseason AP Top 25 poll heading into their Saturday night matchup with Louisiana Tech. Texas has been in the top 25 the last two years but lost the opening game to Maryland each year.

“Maybe guys felt the pressure and the outside noise,” senior offensive lineman Zach Shackelford said. “They didn’t focus on our team and our coaching staff … When we play to win, it’s a whole
different dynamic.”

After each loss and subsequent dropping out of the rankings, the Longhorns had to fight their way back into the poll and regain the benefit of the doubt.

For the majority of the nation, seeing junior quarterback Sam Ehlinger and the Longhorns beat No. 5 Georgia to win the Sugar Bowl answered the only question surrounding the Longhorns for the past two years — the question will not be stated because you’ve probably heard it by now.

In both opening game losses, however, Texas was favored to win. The games were sloppy, with Texas committing four combined turnovers in two games. Ehlingher, who only played in the 2018 matchup, had a theory on why the games played out in such fashion.

Now, Texas can right its wrongs Saturday night. And they have been waiting for this opportunity for a while now.

“I’m so excited,” Ehlinger said. “I’ve been itching since January for this weekend.”

This year surely seems different. One of the key differences is the shift in culture. The leadership comes from the players instead of the coaches.

“Coaches have a lot of responsibilities on game day,” Ehlinger said. “When adversity hits, it’s a lot easier for a player to respond, especially when you’ve been working the player-led stuff … Guys respond to what players have to say.”

Despite being a nonpower five school, the matchup with Louisiana Tech will not be a cakewalk. The Bulldogs have ended their season with a bowl win for five consecutive years. From Texas’ perspective, they look at  Louisiana Tech with nothing but respect.

“They have all these older guys, and that’s how you run a program,” defensive coordinator Todd Orlando said at his weekly availability. “Coach Holtz has established the program and (got) guys that fit into the system, and they’re older. They’re going to come in here with their experience, and that’s going to be a big part of this game.”

The confidence Ehlinger feels Texas lacked the past two years is now there, and it has nothing to do with outside motivation or who the opponent is on the schedule. The swagger the Longhorns feel they possess and will display Saturday is purely internal.

“It doesn’t really matter who we play,” said offensive coordinator Tim Beck at his weekly availability. “It’s about our guys. It’s about going out there and putting our best on the field. … We don’t even talk about them in terms of who we’re trying to play. It’s all about us.”