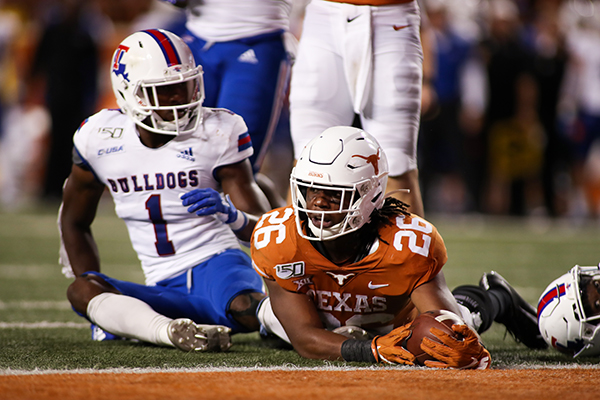 Though Texas’ blowout is an indicator of its offensive capabilities, the Longhorns feel there is still work to be done before their matchup against LSU in Week Two.

“I thought we played really well at times,” junior quarterback Sam Ehlinger said. “Obviously there were some stops, but that was because we stopped ourselves. (There were some) missed assignments, but I thought overall we played tough, we played physical, our receivers went and got the ball (and) did well on the perimeter. Overall, we did a good job.”
Texas struck early in the first quarter with a touchdown only two minutes and twenty seconds into the game. Quick drives gave Texas an edge over Louisiana Tech throughout the game with five of seven scoring drives lasting under three minutes long.

“I thought we started really, really fast, and that’s what helped us overcome some of those miscues,” head coach Tom Herman said.

Yet wide receiver Brennan Eagles was the clear standout. The sophomore was coming off of the operating table two weeks ago due to arthroscopic elbow surgery when he scored his first career touchdown on a 28-yard completion Saturday night. He followed it up with another touchdown after a deep pass from Ehlinger in the third quarter en route to his three-reception, 59-yard performance.

Texas’ running back depth has also been affected by injury, but sophomore running back Keaontay Ingram was able to bounce back. After being sidelined in the last weeks of fall camp with a bone bruise, he rushed for 78 yards, averaged 7.1 yards per carry and had one touchdown.

There were drives Ingram was the entire offense. Much of the conversation going into Saturday night was around the lack of depth. Ingram took that and put the responsibility on himself.

“(I was) kind of disappointed in my production, I feel like I didn’t help the team enough. I feel like I need to step it up a little more,” Ingram said.

Freshman running back Jordan Whittington and makeshift running back Roschon Johnson — recently converted from quarterback — also saw time on the field. Roschon was recovering from a stomach virus Friday and Saturday morning, but still rushed for 31 yards. Whittington’s reps were limited, as he suffered a groin injury in the first half. Though Whittington was cleared to play in the second half, Herman labeled him as day-to-day.

Though this provides yet another setback regarding running back depth, Ingram is remaining positive.

“I feel like it’s part of growth, you’re going to have obstacles,” Ingram said. “Any football player can tell you that, we have a lot going on in the room, probably more than any other unit, but it’s all for a reason.”

Now, the Longhorns are preparing for an even bigger battle against No. 6 LSU, which has attracted ESPN’s College GameDay. However, the team remains focused and is not worried about the hype.

“I’m very excited, it’s going to be a big game. You can’t shy away from that,” Collin said. “But you’re going to have to figure out a way to calm your nerves and realize it’s the same 100-yard field, the same 11-on-11 game of football we’ve been playing. (We need to) just go out there, and play our best. Don’t let the hype get us out of our game and just focus on being our best.”