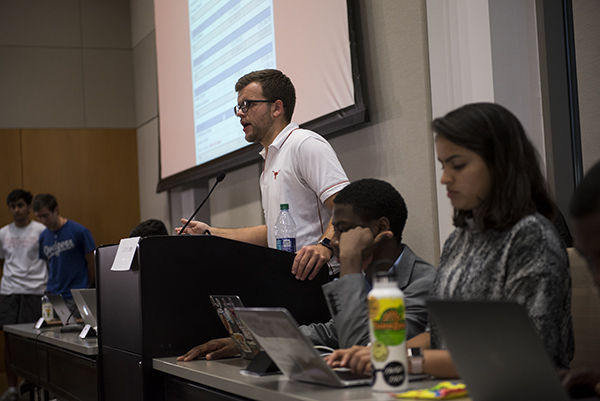 SG received $196,005.87 for the year from the University, and the SG Financial Affairs Committee recommended they stay within a budget of $112,820.00. This money will contribute to funds for student organizations, SG agencies, such as SURE Walk and the Women's Resource Agency, SG operations, executive board and some assembly representatives stipends, which span from $3,420
to $6,840.

Before discussing the budget, Jakob Lucas, speaker of the assembly, said he wanted to reintroduce everyone and go over assembly rules and formalities.

"I understand this meeting feels like it is full of fluff, with the introductions and things like this," said Lucas, a government senior. "But a lot of this work is your relationship with the people in this room, and for some of you, that relationship has been neglected for months."

But members, such as Brennan Caviness, a representative for the Steve Hicks School of Social Work, said they did work with other SG members over the summer.

"We dealt with all of the budget requests that came through during the summer," Caviness said. "(The committee) put in several hours of work to make sure that student organizations were able to get their money over the summer and start to make the outreach that really sets the basis for what＊s going to happen over the school year."

Caviness said he has also worked recently with the current Financial Affairs Committee to create the budget for the 2019-20 academic year.

"We all went into it knowing that the decisions we made would have a lasting impact, because these budgets enable them to make direct inroads with students," Caviness said. "We're funding all of the agencies, which is the biggest part of the students."

"This took months of planning to put together," said Kenny, a public health sophomore. "I appreciate the people who made the time to make this budget."

"We sift through all applications, budgets and past recommendations," Kenny said. "We don't just (choose randomly) where the money goes. There's a lot of research that goes through
the allocations."

Caviness said the budget will move back to committee before the assembly votes on it next week.

"We made very deliberate choices," Caviness said. "I doubt much changes before the next meeting, and by next meeting, people who applied for money from Student Government will be allotted that money."