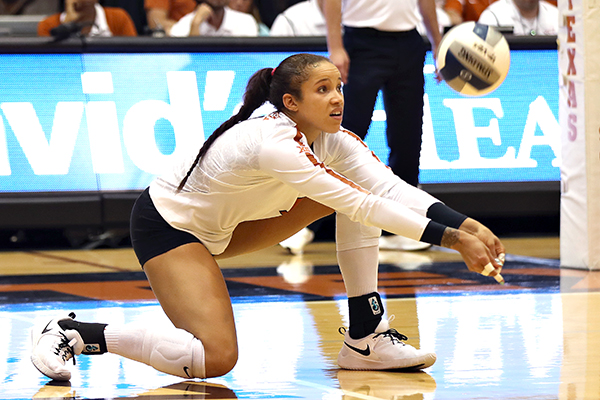 The No. 3 Longhorns took down the No. 8 Golden Gophers of the University of Minnesota in straight sets on Wednesday night. While the final two sets turned into marathons, Texas would finish 25-22, 29-27 and 35-33.

The match had important poll implications for each team, as Texas tried to remain perfect while Minnesota was trying to maintain a .500 record after being upset by Florida State the weekend before. It was also an opportunity for Texas to put on a show in front of a packed house.

“It was so great to get tested like this with this group of players,” head coach Jerritt Elliott said. “You know we think we have a special group, and you have to see what they look like in the test of time.”

Minnesota knew that Texas was playing with a smaller rotation and took advantage early. With an aggressive attack and a constant presence at the net, the Golden Gophers made life difficult for the team.

However, Texas would adjust by riding the serving prowess of sophomore outside hitter Logan Eggleston. Late in the set, the Longhorns scored four points in a row with Eggleston serving, taking the lead for good in the set.

Minnesota came back fast at the beginning of the second set. The back and forth set favored the Gophers as they were able to get to a set point at 24-21. Texas fought back and was able to pull off the win 29-27. The toughness of the team was on full display to the delight of the fans.

“The crowd was pheneomal,” Elliott said. “I loved how engaged the crowd was. It was like an NCAA tournament game. People were involved and cared about it. It’s the best energy we’ve had.”

Senior Micaya White played a large role in the comeback effort, being a part of three straight points to tie the match at 24 before the team pulled away. The two sides fought point for point until Eggleston and White combined for back to back kills to end the set.

“I think it’s a good confidence booster that we can be down in those type of positions and fight back,” White said. “We have a lot fiery kids. It was exciting to be tested and see what those freshmen could do.”

The third set was the most dramatic of the three, with both teams unwilling to give any room to the other. At one point, the match would be tied at 33 points apiece. Both team were forced to fight for every point.

The freshmen showed to be more than ready for the challenge. Molly Phillips and Skylar Fields would record consecutive kills before combining for a block that would tie the match at seventeen and shift the momentum back to the Longhorns.

Minnesota fought back for momentum, as both teams would trade point for point. Texas fought off nine set points, a display of tenacity that has been a staple of the team for the past decade.

White would finish the match off with two more kills, clinching the hard-earned sweep for the Longhorns.

The Longhorns are now 3-0 heading into an even bigger test aginst No. 1 Stanford, the defending national champion. While this was a big test for the team, this Sunday should be an even tougher fight, but this team is prepared to keep fighting.