New Admissions Welcome Center to open at end of the month 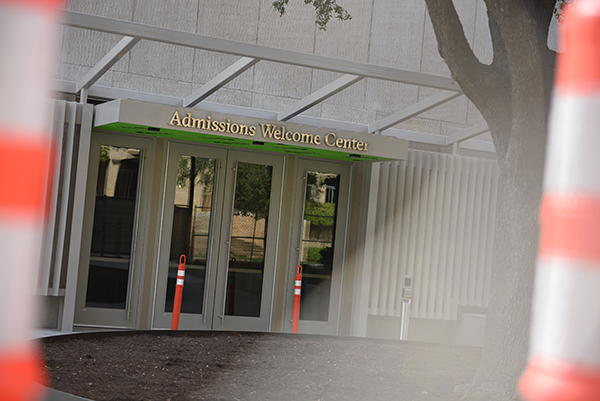 Prospective student tours will be welcomed in the center of campus instead of on the other side of Guadalupe Street.

The new $5 million Admissions Welcome Center will be located inside the Perry-Castañeda Library, replacing the current visitor’s center in Walter Webb Hall, said Veronica Trevino, media manager of Financial and Administrative Services. All campus walking tours will start at the new center, and prospective students will be able to meet with admissions counselors to work on their applications and learn more about the University. The center will open Sept. 30 on the side of the PCL facing Speedway, said Miguel Wasielewski, executive director of admissions.

Trevino said the old visitor’s center will be reconfigured as office space for nonacademic departments. Wasielewski said they chose to put the new center in the PCL because it is in the core of campus, and it is surrounded by buildings like the Blanton Museum of Art and the Jester West Residence Hall, which are both relevant to the student experience at the University.

“When students and families are visiting campus, we want them to envision themselves as Longhorns,” Wasielewski said. “(The center) is centrally located in one of the most beautiful areas of campus.”

The center will include a 150-seat auditorium where admissions officials will give tour presentations and host recruitment events, Wasielewski said. He said the building will also have new office spaces for admissions counselors to meet with prospective students and some Texas-themed art installations in the lobby area.

The construction of the center is the first project out of three to be completed as part the Enrollment Management Initiative, a series of projects led by the The Office of the Executive Vice President and Provost. The other two central campus projects include the future Texas One Stop for Enrollment Services on the first floor of the main building and an upcoming career center on the third floor of the Flawn Academic Center, said Mike Carmagnola, director of Project Management and Construction Services. He said these projects are expected to undergo construction in the coming year.

Carmagnola said the Enrollment Management Initiative contains projects focused on serving students in the core of campus. He said his team is aiming to increase student access to career and admissions services by placing them in areas of campus heavily used by students.

“Those are three major initiatives to support the student experience,” Carmagnola said. “Those pieces will start with the Welcome Center and then roll out with the others in the next year or so.”

To open space for the center in the PCL, offices and PCL staff cubicles were relocated to a different part of library. Project Management and Construction Services tore down the walls to make an opening for the center’s entrance facing Speedway.

“The Admissions Office worked closely with Project Management and Construction Services and external vendors to create a space that suited their mission and goals for the future,” Trevino said.