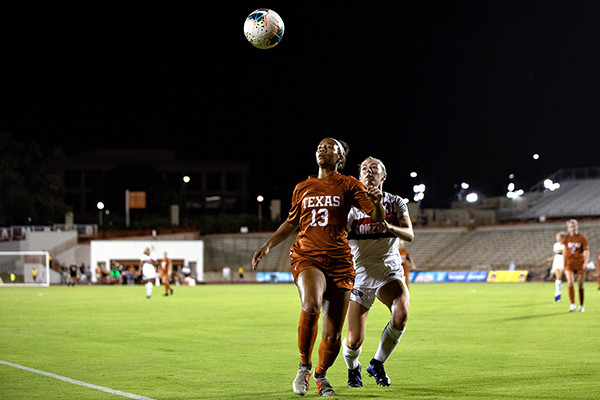 After suffering two losses in as many weeks, Texas soccer is looking for change.

While the team started the season in thrilling fashion with a 4-3 win over Gonzaga, the Longhorns have now lost two matches in a row, falling out of the NCAA top-25 rankings. Texas will get a chance to reverse their fortune against the Ladyjacks of Stephen F. Austin on Friday.

The Longhorns last took the field during their 1-2 loss against Colorado. The team’s defensive struggles on full display in the preceding loss to Denver seemed to be on the mend in the following match, though the offense continued to be a problem.

Texas proved able to get shots off against the Buffaloes, but the shots failed to find the back of the goal. One of the veteran leaders on the team, senior forward Cyera Hinzten, registered five shots, improving on her performance in the Denver game where she was limited to one.

The team’s offensive performance has been disappointing in the last two games, although it is not necessarily surprising. Head coach Angela Kelly knew that learning to play as a team would take time, on both offense and defense.

“We have to continue to grow and play as a team to make things easier for ourselves,” Kelly said. “That’s something that’s difficult to come by early in the season. We’re going to have to work a lot on that cohesion.”

Texas was able to beat Gonzaga in the first game of the regular season, but only after a run in the second half made up for the slow first. Even with the improvement on offense, the issues with cohesion were still visible.

Aggression on offense is something the team will need to focus on heading into Friday’s game. Stephen F. Austin could prove to be a tough challenge for the Texas offense, as the team boasts a defense that held its previous opponent to zero goals.

While it may prove to be a difficult task, now is the time for Texas to address their issues and shift the momentum of their young season. The team will need to improve on offense if they wish to live up to the expectations that Kelly has set.

“We have high expectations for the team,” Kelly said. “Certainly for individuals on the team and the recognition they’ve gotten so far, but it has to be as a unit. We need to play as a team, and as the days go by, we need to be able to be cohesive.”

A 1-2 start does not align with these high expectations. Offense and cohesion will clearly be something the team focuses on as they travel to Nacogdoches to avoid a third consecutive loss.