Texas gets creative for rematch against Stanford 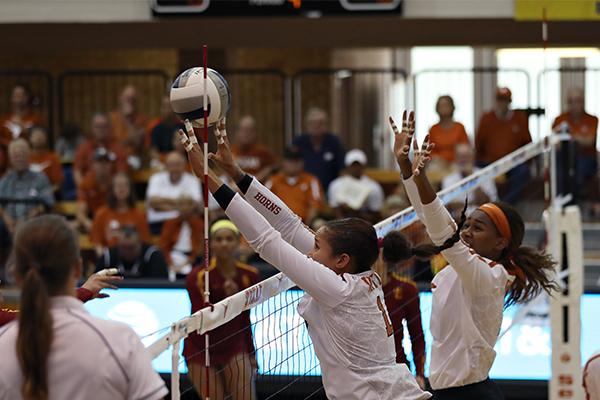 On Sunday, the Longhorns head to Palo Alto, California, for a rematch against the defending national champion the Stanford Cardinal.

Senior outside hitter Micaya White was extremely conscious of the matchup after a hard-fought Texas win against Minnesota.

“I think it was a good confidence booster that we could be in those positions and fight back, but we need to think of who we are playing next because it’s a whole different team,” White said.

The Cardinal has the same 3–0 record as the Longhorns, but they have not faced the toughest portion of their schedule, playing only one opponent that was ranked in the American Volleyball Coaches Association — Florida.

Texas will have to travel and play in the silence of the Cardinal arena — the complete opposite of the raucous Gregory Gym the Longhorns are used to.

“It’s a completely different environment,” Texas head coach Jerritt Elliott said. “It’s going to be really quiet. It’s a very strange feeling, so we have to prepare
on that side and sustain that emotion.”

Despite the silence, Texas will be energized by the opportunity to avenge frustrations on an opponent’s home floor.

In 2018, the Longhorns faced Stanford twice and lost each time. This weighed heavily into their NCAA tournament seeding, preventing Texas from hosting the NCAA tournament all the way through the regional.

Sophomore outside hitter Logan Eggleston and White have been vital in the offensive game, with the duo combining for approximately nine points per set.

For Texas, a trio of freshmen have also helped out White and Eggleston and have been heavy contributors in the early going.

Middle blocker Asjia O’Neal, middle blocker Molly Phillips and opposite hitter Skylar Fields have contributed seven points per set, delivering in pivotal moments. A stuff block by O’Neal proved to be the turning point in the third set against Minnesota. The freshmen have seemingly been thrown to the wolves quickly with the high amount of playing time they’ve received. Their quick maturation will continue to serve the Longhorns well down the road.

Part of Stanford’s success is lead by 6-foot-6 senior outside hitter Kathryn Plummer. Plummer has been a centerpiece for the Cardinal this season, averaging over five points per set on a hitting percentage of .435.

Along with Plummer leading the way, senior libero Morgan Hentz has also improved her game. Hentz has tallied five digs per match, which builds off a 2018 campaign where she averaged a little over four digs per set.

Even though Stanford’s length and defensive balance have proven to be difficult to deal with, Texas has shown a potential to think outside of the box all season, coming with creative solutions.

This was on full display when senior libero Claire Hahn was placed in the frontcourt after Texas ran out of substitutions.

“I was thinking on the fly, something like that hasn’t happened to me in 15 years,” Elliott said.

This doesn’t mean Hahn will be placed in the same position again, just that Texas has a few tricks up its sleeve to make the intriguing match even more interesting.