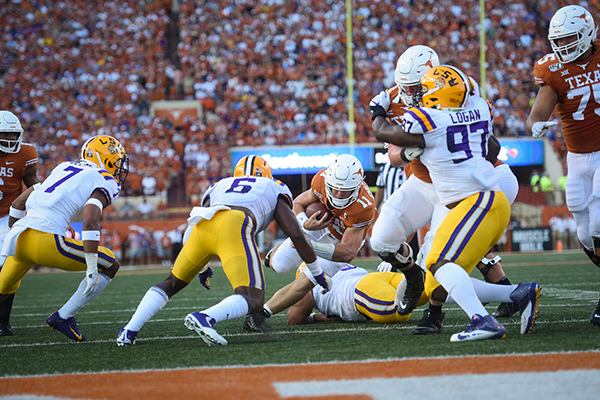 Sam Ehlinger stood in the shotgun with less than five yards separating the junior quarterback’s offense from the end zone not once, not twice but six times in the first quarter, yet LSU refused to give the Longhorns anything to show for it.

A battle of physicality and coaching took place on the LSU goal line in back-to-back drives and the vaunted Tiger defense didn’t budge either time, holding the Longhorns to a grand total of zero points in what appeared to be a promising first quarter.

Despite the goal line stand occurring early in the game, the Longhorns would never overcome the points they lost on those possessions, falling to No. 6 LSU 45-38.

Down 3-0 in the first, the Texas offense put together a long drive that found itself at the two-yard line on third and goal. Ehlinger ran a designed run toward the right boundary, which was snuffed out by the Tiger defense. On fourth down, Texas head coach Tom Herman decided to go for it, and a perfectly designed play saw sophomore running back Keaontay Ingram all alone in the endzone. Ehlinger delivered a good ball across the field — the crowd rose to its feet after seeing exactly what Ehlinger saw: a wide open Ingram — yet Ingram couldn’t haul it in.

“We came in this game to play to win,” Herman said. “That’s why we went for it early on the goal line.”

But Texas’ opportunity for redemption came again quickly. The Longhorns found themselves with third and goal on the one-yard line after an interception from sophomore linebacker Joseph Ossai.

Ingram carried the ball up the middle for no gain, then Herman decided to gamble for a second on fourth down. Ehlinger tried to carry the ball on another outside run, and once again, LSU stuffed it. Two key moments, and two key failures for the Texas offense.

This wasn’t a hint to what was in store for the Texas offense. In fact, the two possessions bore little resemblance to the Longhorn offense of the second half that saw Ehlinger finish with career high marks in passing yards (401) and touchdowns (four). Yet Texas couldn’t afford to keep trading touchdowns after burying itself in that first-half 13-point hole.

Although they were unsuccessful, Herman has no doubt that the decision to go for it twice instead of taking chip-shot field goals was the right one.

“Our whole mantra in this game was to empty the chamber, play to win, and we weren’t going to back away from that,” Herman said.

By the time Ehlinger finally fell into some sort of rhythm, it was too late for Texas. Even with the career highs, LSU senior quarterback Joe Burrow won the duel, throwing for 471 yards and four touchdowns at a 79% clip.

Burrow led two quick-strike touchdown drives in the second quarter that took full advantage of the Longhorns’ inability to capitalize in the red zone by giving LSU a 20-7 lead heading into the half. Texas would never regain the lead.

Ehlinger said after the game that when they were at their best in the second half, it was good enough to win. But for a Tiger team hungry for a win over another top-10 team, two possessions without the Longhorns’ “best” was all it took for LSU to pounce all over Texas.