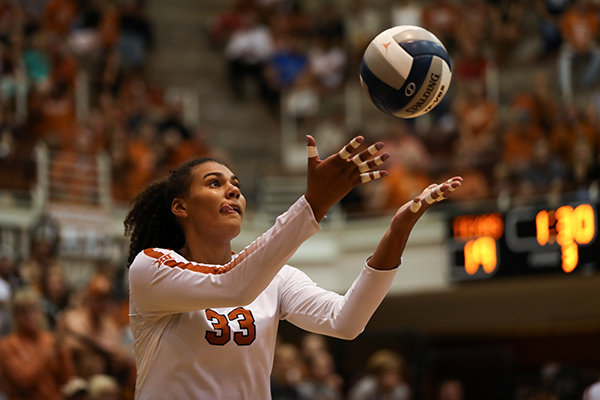 The Longhorns have shown that they are not afraid of big time matches. No. 15 USC and No. 8 Minnesota both made trips to Austin last week, and Texas sent them both home with losses. And in the first set Sunday, the Longhorns came out swinging.

Sophomore outside hitter Logan Eggleston, who has played a huge role for the Longhorns early on in 2019, started things off hot for the team. Two service aces gave Texas an early lead, and six kills in the set for Eggleston helped to secure a dominant first-set win.

But, it was Stanford who would come roaring back in the second. It took her one set, but once Stanford star outside hitter Kathryn Plummer got rolling in the attack, the talented and young Texas block had little chance to stop her.

Plummer racked up seven kills in the second set, and Stanford came back with vengeance to tie things up at one set apiece.

That was when Plummer, the two-time AVCA National Player of the Year, began to take over the match. Three straight kills early on in the third set helped the Cardinal to a 5-0 lead. With three Plummer kills later in the set, the lead was extended all the way to 20-8. The Longhorns hit just .121 in the set, one of their worst marks of the season.

But true to the nature of a matchup like this, Texas wasn’t going down without a fight. The Longhorn offense has leaned on senior outside hitter Micaya White since her first year on the Forty Acres, and in the fourth set, it was the White and Eggleston show. The duo did exactly what Plummer did in the third set — they forced Texas out to a big lead from which it would never look back. The Longhorns hit a rock-solid .412, and just like that, the match was tied at two.

In games like this, it’s great players that find ways to make things happen. And while Texas has plenty of talent, Plummer was the best player on the floor in Maples Pavilion. Three straight kills by Plummer to start the fifth set put the Cardinal up 3-0.

When Stanford seemed to pull away, Texas would climb its way back. But the 13-12 lead the Cardinal clung to in the fifth set proved to be all Stanford needed.

With two points left before the Cardinal could clinch the victory, Plummer showed exactly why all her accolades are well deserved. She knocked down her 33rd and career-high 34th kill of the match, securing the win in a marathon five-set showdown.

While this was the first loss of the season for Texas, there is something to be said for competing in games of this caliber. With head coach Jerritt Elliott starting a youthful squad, adversity early in the season is a welcomed sight.

Next on the schedule for the Longhorns is No. 13 BYU in Wichita, Kansas. The difficult stretch of games is far from over, but if anything can be gathered from the epic clash in Palo Alto, it’s that Texas is here to play with anyone.