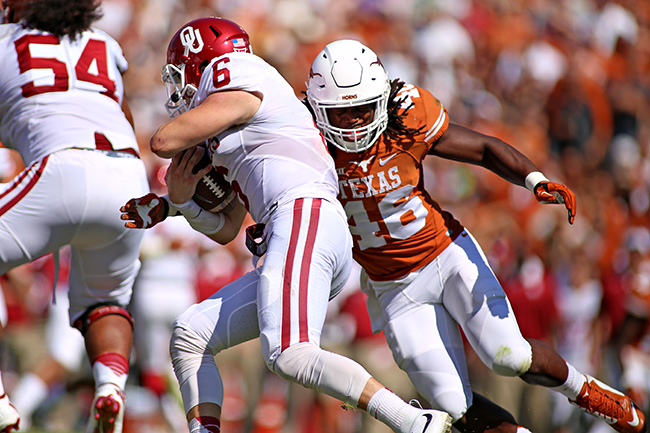 As the NFL kicks off its 100th season, many former Longhorns are ready to shine under the bright lights at the highest level. With players in important roles throughout the league, former Longhorns will be key in shaping the narratives of the 2019 NFL season.

While the rosters haven’t changed too much since our preseason article, there are some changes to be aware of. Several Longhorn rookies have officially earned roster spots, including Andrew Beck (TE-Broncos), Charles Omenihu (DE-Texans) and Kris Boyd (CB-Vikings). Two rookies that did not survive roster cuts, but did secure practice squad spots, are Lil’Jordan Humphrey (WR-Saints) and Calvin Anderson (OT-Jets).

Forgoing his senior season to declare for the NFL draft, former Longhorn wideout star Lil’Jordan Humphrey went undrafted before signing with the Saints. Despite collecting over 100 receiving yards and a touchdown this preseason, he failed to make the roster before the NFL’s 53-man deadline on August 31. However, Humphrey was signed to the practice squad the next day, and with talent and grit on his side, developing in the Saints’ practice squad could be just what he needs to achieve his NFL goals.

After a quiet season that ended in injury with the Cincinnati Bengals, former All-American linebacker Malik Jefferson was waived from the roster at the end of August. He was quickly claimed by the Cleveland Browns off waivers, giving Jefferson the chance to continue his career. He will have the chance to join a resurgent Browns squad that has been led out of obscurity and into the limelight by quarterback Baker Mayfield.

With offensive weapons like Odell Beckham Jr., Jarvis Landry and Nick Chubb, the Browns are a trendy pick to make the playoffs this season despite their 44-13 loss to the Titans. Jefferson has the chance to contribute to a defense that features players such as Myles Garrett and Olivier Vernon. Barring injury, he could reach the potential scouts saw in him when he was drafted two years ago.

Swaim was signed as an unrestricted free agent by the Jacksonville Jaguars this past spring, and is the starting tight end while rookie Josh Oliver recovers from a hamstring injury. Swaim will need to establish chemistry with his new quarterback early on to hold onto the starting job. The former Longhorn could become an integral part of an offense that requires strong play from its pass-catchers.