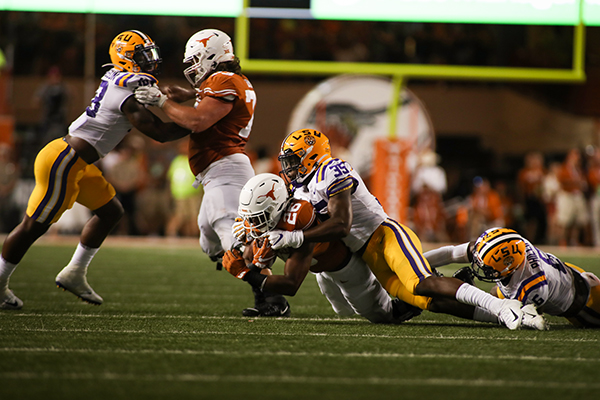 Once the second quarter began, it was evident LSU’s senior quarterback Joe Burrow arrived at Darrell K Royal-Texas Memorial Stadium to make a statement — there was nothing Texas could do to stop him.

Following a first quarter that resulted in three points and an interception, LSU scored on seven of the next eight drives, leaning heavily on Burrow to pick apart the Texas defense through the air.

Burrow was nearly unstoppable, with only eight incompletions to go along with his 471 passing yards and four touchdowns. He was able to make just about every throw, including a pinpoint pass to junior wide receiver Justin Jefferson on third-and-17 late in the game, which went for a 61-yard touchdown and ended Texas’ chances of pulling off the upset.

“I thought Joe Burrow was the difference in the ballgame,” Texas head coach Tom Herman said. “He fit some balls into some really tight windows and was really accurate down the field. He’s going to have a heck of a year if he stays healthy.”

When Burrow hit Jefferson, it not only allowed LSU to convert on third down — a continual trend all night — it also put LSU up 14 points with 2:27 remaining in the game.

“We just got to get off the field on third down,” senior defensive lineman Malcolm Roach said. “We got good pressure on the quarterback all night. We just (have) to finish plays.”

The Tigers were 50% on third down, converting when they needed it most. The Longhorns, however, saw two separate drives inside the five yard line –– neither resulted in points.

“(It was) crucial,” junior quarterback Sam Ehlinger said. “The ball (was) inside the five yard line twice and came away with no points. That’s unacceptable.”

As they continued to go scoreless in the red zone, LSU took a commanding 20-7 lead and forced the Longhorns to play from behind for the rest of the game. Texas rallied and cut the lead to two twice, but was never able to retake the lead after being up 7-3. From there on, Texas was playing catch-up, eventually failing 45-38.

LSU’s top-10 road victory allowed the Tigers to announce their arrival as an early contender in the College Football Playoff picture, and allowed them to move up to No. 4 in the AP poll. Texas’ loss just dropped the Longhorns three spots to No. 12.

“Obviously it hurts,” Herman said. “It hurts a lot, but I think they all realize all of our long-term goals are still out there.”

Those long term goals include the road back to the Big 12 championship, which starts when Big 12 competition begins with a matchup against Oklahoma State in two weeks. Until then, Texas will make a trip to Houston for an opportunity to bounce back against Rice.

Being outside the top-10 puts Texas in a familiar position — in an upward climb. In order to work their way back into the College Football Playoff picture, the Longhorns will need to win out, which most likely means taking down No. 5 Oklahoma twice.

“Now we’re facing adversity,” Roach said. “We’re getting squeezed. Like a sponge, you get squeezed (and) see what comes out of it … We want to see what comes out, clean water or dirty water. We want it to be clean (and) respond.”