Volunteers ‘Scare for a Cure’ for cancer 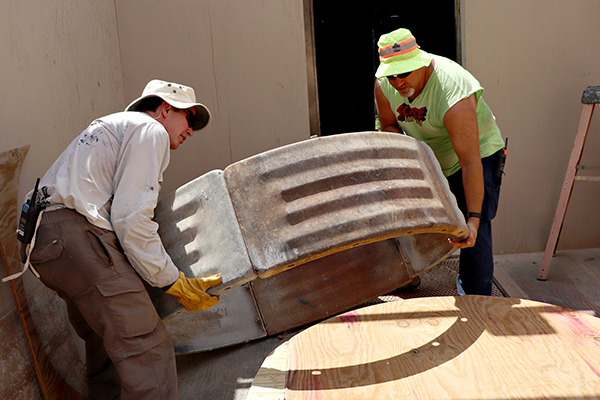 Behind the remnants of an old Western ghost town in Manor, Texas, something ghoulish resides.

Scare for a Cure is a nonprofit, haunted attraction that donates its net proceeds to cancer research. Located behind the J. Lorraine Ghost Town, the attraction is currently gearing up for its 2019 haunt season. Volunteers are hard at work building a maze filled with haunted ruins, lurching creatures and blood-filled cannons. During a tour showcasing the attraction’s progress, The Daily Texan spoke to the team that brings the terror of Scare for a Cure to life.

Build director Jarrett Crippen led the Texan through winding corridors and elaborate sets being constructed by the hardworking volunteers. Highlights include a makeshift bridge built above an alligator pool, a cannon that blasts gory liquid at customers and a room covered in molten lava. Altogether, these elements will create a customer experience that lasts for about an hour.

Despite the intensive labor and elaborate set design, the builders and actors at the attraction are unpaid. Crippen said even as a volunteer, he is extremely passionate about the project.

“It’s all volunteer-based,” Crippen said. “I spent 25 years at the Austin Police Department, and after I was like, (Scare for a Cure) is where I want to be. I want to be working with kids and raising money for charity.”

With other haunted attractions in and around Austin, including the House of Torment and Scream Hollow, there is constant competition to be the most frightful. Crippen said Scare for a Cure stands out with its video game adventure-inspired experience.

“Richard Garriott, the godfather of our show, is a video game designer,” Crippen said. “His goal was to take you and put you in a game. It’s like a theatrical show where you’re the only six people in the audience, but it’s across 35 stages.”

The theme for the 2019 season is “The Trial of Blood and Stone,” featuring an ensemble of ancient ruins inspired by adventure films, such as “Indiana Jones.” Debra Buffington, vice president of Scare for a Cure, said customers will have to carry significant elemental objects throughout the ruins and can use them to alter the narrative experience of the attraction and its actors.

“(Audiences) might have to carry something that signifies an element,” Buffington said. “Then maybe a good (character) will hand them (an element) that might help them in their final decision making … At the end, they can either go with the bad (character) or they can destroy them.”

In addition to a plethora of volunteer scare actors working the attraction, several animatronic effects are used to spook customers. Operations director Suzie Hawley said the intricate mechanical ideas are a product of the volunteer team’s collective creativity.

“A lot of times we’ll all work together, and it takes the whole team to make these things come alive,” Hawley said. “The more people we have, the more brain power we can put into solving problems and making the show better every year.”

Scare for a Cure unites creative volunteers to work on a terrifying experience that brings frightful joy to customers all while raising money for a great cause.