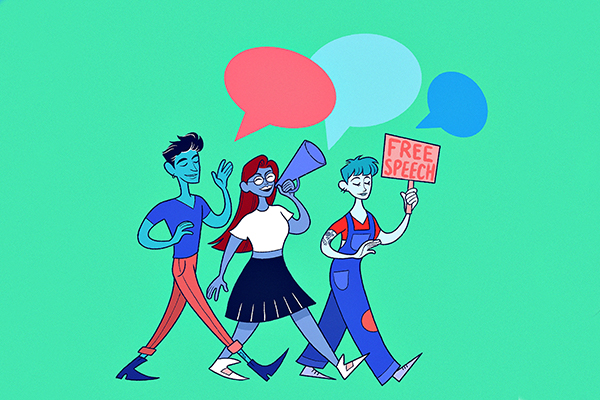 Unlike some Texas public universities, the University had to change more of its campuswide free speech policies after a new state law went into effect Sept. 1.

The 86th Texas Legislature passed Senate Bill 18, which converted some parts of college campuses to traditional public forums instead of limited public forums. Public universities are now required to ensure that members of the public can speak freely, regardless of content.

University spokesperson J.B. Bird said the University previously designated certain outdoor areas as limited public forums, meaning only students, staff, faculty and invited guests could demonstrate there. Under SB 18, anyone can now demonstrate in these areas.

SB 18 also requires universities to create disciplinary policies for students, faculty and staff who infringe on others’ rights to free speech.

“Those disciplinary processes are not new,” Bird said. “(But) the law has some language that wants universities to spell out some certain forms of discipline.”

Some public Texas universities, such as Texas A&M and the Texas State System, said they did not make many changes to their free speech policies because they were already generally in compliance with the new law.

“The actual bill change won’t impact us because we already had the traditional public forums,” Pugh said.

Mike Wintemute, Texas State System spokesman, said the system made minimal changes to their outdoor free speech policy. The system’s free speech disciplinary policies did not need to be fundamentally changed as they were already in line with SB 18 at least in spirit, Wintemute said,

Other public universities, such as the University of North Texas, had to make more changes to the policies. Maureen McGuinness, UNT dean of students, said members of the public will no longer need a sponsoring student organization or sponsoring faculty to demonstrate on campus.

In a campuswide email sent Aug. 30, UT President Gregory Fenves said the University has thrived because of its commitment to free speech and the open exchange of ideas for decades.

“Our campus is a hub for people to gather and share different perspectives and experiences,” Fenves wrote in an email. “This freedom is a constitutional right that has always been the foundation upon which students learn and faculty members teach and conduct research.”

According to the bill, universities may still restrict the times its outdoor spaces are available to the public and the types of actions the public can perform. Bird said the University can also still restrict actions which may affect the learning environment.

Lily Bonin, Young Conservatives of Texas chairwoman, said she was disappointed in the University’s changes.

“UT administrators have chosen to do the bare minimum required by the state,” Bonin said in an email. “They may have hit the action points of SB 18 but ignored the spirit of the legislation and its goals and intentions for campus free speech and student rights.”

UT students who feel threatened by someone’s speech or action on the public forums may still call 911 or UTPD if they fear “violence or bodily harm.”

University Democrats president Joe Cascino said he fears the bill could be used to protect speech that is offensive to minorities.

“This legislation is flawed, unnecessary and could cause serious safety concerns,” Cascino said.

Public universities have until Aug. 1, 2020 to finalize their new free speech policies. UT will bring interim policies to the Board of Regents next year. UNT is following a similar course of action, and they will recommend permanent policies next year.