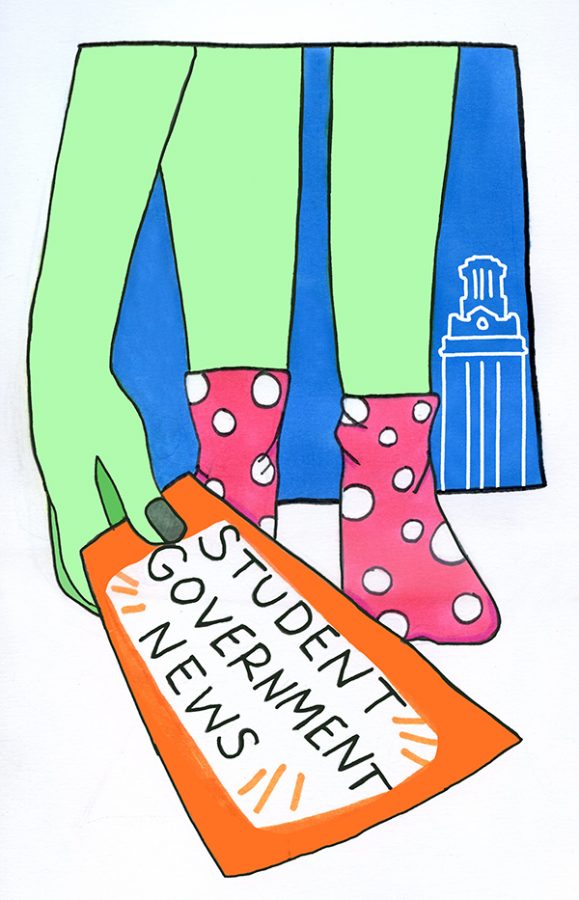 The newsletter will contain weekly meeting agendas, a summary of the last week’s meeting, representatives’ work and other highlights or achievements, Briddell said. She said she hopes to eventually include a form to receive student feedback about SG’s performance.

Currently, students can subscribe to an email list in the UT List Server to receive SG meeting agendas from the speaker of the assembly. These emails do not contain context or explanations of legislation.

“Anyone can find out what happens (in SG) online or on Twitter, but not a lot of people will go out of their way,” journalism senior Briddell said. “A newsletter is a modern-day resource for people to just check their email that night or that morning and figure out if there’s something that’s going to affect them or that they want to speak about.”

Briddell said SG’s decisions impact the whole campus, but not enough of the student body knows what happens during meetings.

“We want to make this sound appealing because people might not understand why they would want to opt into something like this,” Briddell said. “I’m hoping to be able to convey the importance of it to the
student body.”

Mackenzie thought of the idea last semester, Briddell said. After Mackenzie joined SG, she said she noticed a need for streamlined communication.

“When I was a freshman, I had no idea what was going on, even when I had been admitted to an SG agency,” said Mackenzie, a government and plan II sophomore. “There were a lot of bills SG was passing that the general student body didn’t have a voice in because they were just not aware of it. It’s hard to find that information unless you’re on the inside.”

“(Students) should have access to information ahead of time so we can avoid people saying they didn’t know what SG was doing and SG tried to sweep something under the rug,” Briddell said. “We can say ‘no’ because it was in the newsletter.”

Government junior Benjamin Speigner said he is not involved in SG but would choose to receive the newsletter.

“SG deliberates over issues that affect me and other students personally,” Speigner said. “Students don’t show up when something they’re interested in has already been decided.”

Mackenzie said she hopes people read the newsletter to stay informed about SG.

“I’m going to do everything I can to make sure (the newsletter) works,” Mackenzie said. “If we can begin to create a culture where it’s normal for everybody to be involved in SG, then more and more people will see us as a way for the school to listen to them.”