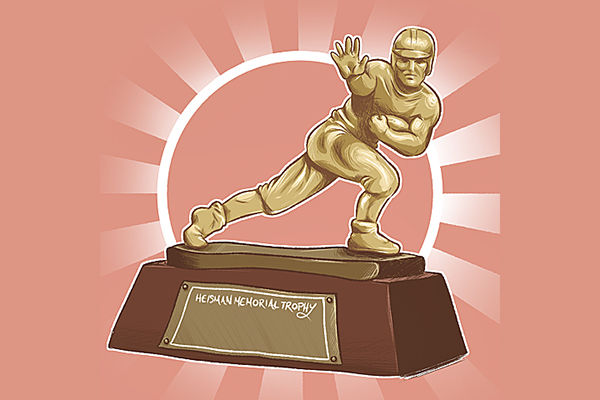 With three weeks of college football under our belts, potential is forgotten and performances are embraced. Although a clear breakaway candidate is yet to emerge, new candidates continue to place themselves into the Heisman conversation.

Here’s who to watch in Week Three:

This really isn’t a surprise.

Tagovailoa had another Heisman-quality game in Alabama’s 62-10 romp of New Mexico State, throwing for 227 yards and three touchdowns to go along with 33 rushing yards and a touchdown before being benched midway through the third quarter.

Tagovailoa has been nearly perfect these past two weeks, posting a completion percentage of 76.4% and a passer rating of 204.3. The only possible critique of Tagovailoa would be that he has yet to complete a full game after getting pulled before the fourth quarter in blowout performances against lower-tier teams. Expect that to change this week as the Tide opens up SEC play against South Carolina.

Oklahoma’s offense is every bit as great as everyone expected it to be.

In two games, the Sooners have coasted for 119 combined points against Houston and South Dakota. Hurts has outgained each of our other Heisman Watch candidates in total yardage through two weeks with a whopping 814 total yards. He clearly already has a command of head coach Lincoln Riley’s high-flying offense.

This week, the Sooners head west to California for a meeting with the struggling UCLA Bruins in the Rose Bowl. Expect another monster performance from Hurts and Oklahoma as they face off against a program that has already lost to two non-Power Five teams this season.

If last Saturday’s showdown in the Lone Star State proved one thing, it’s that neither Texas nor LSU are the true DBU.

Joe Burrow shredded a Texas secondary returning its starting safeties from last season and two corners with little experience, throwing for a career-high 471 yards while completing nearly 80% of his passes. In a game that came down to which team was going to come up with the big play, it was Burrow who completed a 61-yard miracle throw to seal the win.

Burrow’s performance against Texas answered any questions about his ability to perform on a large scale, something he will be repeatedly tested with throughout the season. If the senior can continue these types of performances against SEC powerhouses like Auburn and Alabama, Burrow could find himself in New York come December.

On the flip side of the proverbial coin from last week’s showdown was the great play of the gunslinger from Austin.

Ehlinger turned out a gem of a performance against the Tigers, but came up just short against the visitors from Baton Rouge. He threw for his own career-high 401 passing yards and four touchdowns in the tough loss.

Both Burrow and Ehlinger proved their ability to shine in the spotlight this past weekend, and junior Heisman hopeful Ehlinger turned in one of his best performances yet against one of the Longhorns’ toughest opponents yet.

If Ehlinger puts up similar performances against a remaining schedule without a defense that compares to that of LSU, Longhorn fans are in for a treat as Texas continues on the road back to the Big 12 Championship.