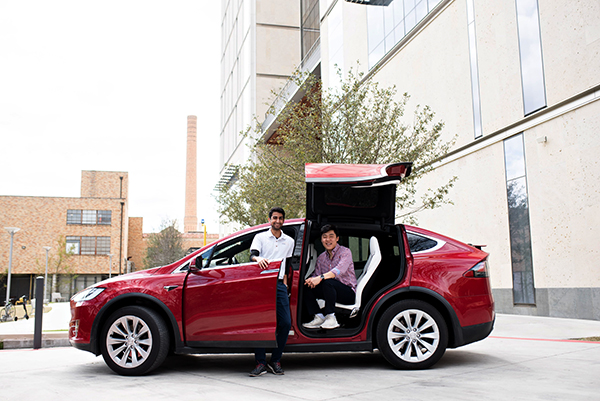 Take a flight. Hop on a bus. Drive. For those looking to travel across Texas, the options are limited.

UT alumnus Mandeep Patel and engineering senior Eliott Lee have a better idea: Whip a Tesla. Founded in 2017, Austin-based startup ElecTrip aims to change the traveling landscape by providing a reliable and hassle-free service to clients. Together, the two own a fleet of Teslas that oil and gas executives, law firms and other professionals book for chauffeured rides.

The Daily Texan sat down with ElecTrip’s founders to discuss their journey starting a company as students at UT.

The Daily Texan: Where did the idea for this company come from? What did it start out as?

Patel: I did some internships, and the engineering workflow was too slow for me. To make any sort of change, it would take forever. That’s when I decided I wanted to pursue more entrepreneurial ventures. ElecTrip came out of attempting to solve the personal problem of going to Houston to see my girlfriend and dreading taking the Megabus. I was interested in electric vehicles at the time and ended up purchasing a Telsa. I sold individual seats to students who wanted a ride and would drive for Uber to cover the rest of the costs.

DT: How did Eliott get involved?

Lee: Mandeep posted on Facebook about this workshop when I was a sophomore. I saw that he had internships at places like Lockheed, United Airlines and BP. I really wanted to pick his brain about recruiting. Over the course of the next few months, we talked a lot over messenger and ended up doing a case competition together. After the competition, he asked me if I wanted to work on ElecTrip, and I was on board.

DT: You’ve transitioned from selling individual seats to only private trips. Why?

Patel: The economics of selling individual seats wasn’t working. It was hard getting a full booking, and even if we did, it would be cramped and people didn’t know each other.

Lee: When we started marketing the entire vehicle to teams at these bigger companies, they were able to work while in the car. They could hold a meeting in those few hours, which they wouldn’t be able to while on a flight. It was hours that they could bill to their client instead of losing to travel time. With this model, we’ve gotten to completing around 800 rides so far.

DT: What is running a company while in school like?

Lee: It gets difficult at times. You have to essentially be “on” all the time. I’ll be sitting in class and have a confirmation pop up in my email, at which point I have to take care of that client. If someone asks for a quote, I have to be on it immediately, responding within like 30 minutes just to have good customer service.

DT: Mandeep, you are now working full time on this. Is there any stress from giving up a job to work on your own company?

Patel: As I get older, it gets a little stressful thinking about the three years I’ve spent working on electric vehicles. I could have gone into industry and gotten a substantial salary and security, but the opportunities and network I’ve built with this company really outweigh that, in my opinion. I’ve met executives of companies like Whole Foods and Shell, partners at Deloitte who have ridden with us. Sometimes things will go wrong with the business, but at the end of the day, it has been worth the risk for me and given me a really unique set of experiences.