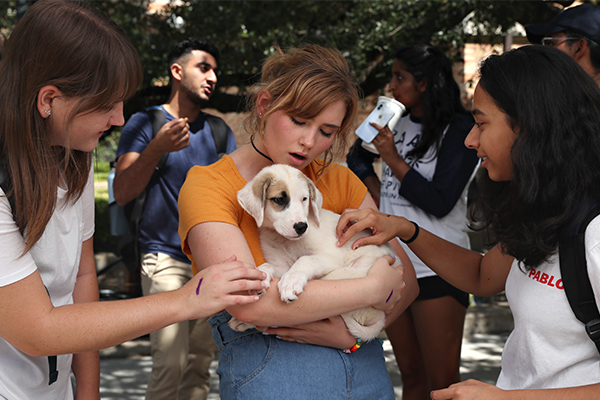 Seva Charities brought puppies, cookies and popsicles to Speedway on Thursday to recruit members for their philanthropic organization.

The recruitment event, called Yappy Hour, served as a way for prospective members to get to know the charity, which does philanthropic work for the Austin area and in India, events officer Jahnvi Patel said. She said this was the first time Seva Charities organized an event specifically for recruiting members.

“Normally, we just (set up a) table and then have our big events throughout the year,” business sophomore Patel said. “We want people to come by, listen to our message, fill out the interest form if they want and then play with puppies for free.”

Seva Charities partnered with the Austin Humane Society, a local animal shelter, to bring puppies on campus for students. Erin Jolly, the society’s education and events manager, said the shelter works with the charity because they both give students an opportunity to give back to their communities.

“(Seva Charities) is here not only to give students a way to give back, but they’re promoting their own charity in India,” Jolly said. “We have worked with them in the past, and we’re here (again) helping them spread their mission, as well as (spread) our mission.”

“It was awesome,” said Karusala, a mathematics and philosophy junior. “We had about 300 people fill out the interest form. A lot of people associated with (Austin Humane Society) came out as well, which brought a whole different crowd.”

Patel said the event promoted one of Seva Charities’ biggest philanthropic projects. She said Seva Charities sends all proceeds made through their events during the year to Akshaya Patra, the world’s largest nongovernmental school lunch program, to feed impoverished children in the country.

“One big thing I’ve learned (from Seva Charities) is that there are people in this world who have it worse than we do,” Patel said. “Just taking time out of your day to give back to those people is important.”