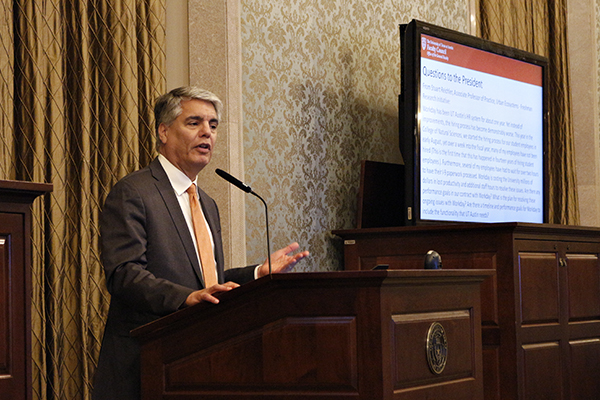 To address concerns surrounding the penalties and impact on students created by new Title IX policies, the UT Faculty Council met Monday to discuss how Senate Bill 212 will be implemented at UT.

Faculty Council meetings are monthly discussions between faculty and staff which delve into campus issues. On Monday, chief compliance officer Leo Barnes led a presentation at the first meeting of the semester on the new Title IX reporting policies outlined in SB 212, which went into effect Sept. 1. Barnes also formally introduced Adriana Alicea-Rodriguez as the new Title IX coordinator, who officially began work on Monday.

“I’m looking forward to what we can do to continue to further the Title IX program on campus,” Alicea-Rodriguez said.

Under SB 212, failure to report a Title IX incident as a college employee is a criminal misdemeanor, and the University is required to terminate employees who fail to report or file a false report. Barnes said University Compliance Services would work to make sure all faculty were informed of the change.

“We’re fully aware that some of this is just going to be different,” Barnes said.

While SB 212 went into effect in early September, the new reporting obligations and penalties go into effect in January. The Texas Higher Education Coordinating Board will determine how this is enforced and will use the next few months to add  specific statutes to clarify certain aspects of the law, Barnes said.

“We’re hoping that as part of the rulemaking process … they will help us define some particular terms,” Barnes said.

After the presentation, council members asked questions and made comments about the new policies.

When classics associate professor Ayelet Lushkov asked about the protocol for when a student asks a professor not to report, Alicea-Rodriguez said professors are required to report in any situation.

“Am I just supposed to report against the wishes of the student?,” Lushkov asked.

Christen Smith, African and African diaspora studies associate professor, said students in a mental health crisis could be negatively affected if they report to a professor without knowing about the new policies.

“I’m concerned about the triggering aspect of students having very personal information that they may not have wanted the University to know about being disclosed,” Smith said.

When asked how students were being informed of the changes made by SB 212, Alicea-Rodriguez said the office would inform students but gave no specific examples as to how.

“One of the things that we’re going to be doing is making sure that the students are aware of these new laws and expectations of them,” Alicea-Rodriguez said.

Barnes said some staff on campus are still confidential reporters, such as the University Ombudsman Office and health care providers.

Bree Van Ness, Advocate and Peer Advocacy Coordinator in the Office of the Dean of Students, said Voices Against Violence offers private peer advocates and a private peer support program and is not required to report a Title IX incident disclosed to them.

Integrated biology professor Norma Fowler said she recommends the victim services offered by the Austin Police Department and in the local community instead.

“(The University is) getting further and further away from best practices,” Fowler said. “If you need to talk to somebody who could make this more humane, we’ve got them in Austin.”

Editor's Note: A previous version of this article incorrectly attributed information about Voices Against Violence. The Texan regrets this error.