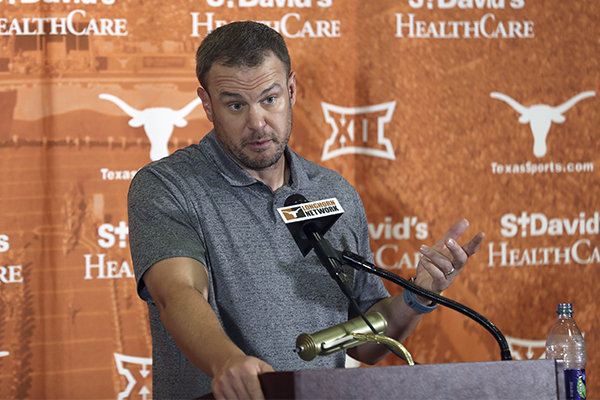 After a dominant bounce-back victory over Rice, the Longhorns turn their attention to the Oklahoma State Cowboys to open Big 12 play. The Longhorns haven’t beaten the Cowboys since 2014, adding more storylines to the matchup than some might initially believe.

Through three games, Oklahoma State has averaged 50 points a game. Led by star junior wide receiver Tylan Wallace, the Cowboys have major firepower on the offensive side of the ball.

“It’s going to be a challenge, for sure,” Texas head coach Tom Herman said. “But you can’t sell your soul, I guess, to stop one because they’re so proficient in the other that you’ve got to be sound.”

Containing Hubbard, who leads the nation in rushing yards and averages nearly eight yards per carry, will be no easy task for Herman. Paired with an All-American receiver like Tylan Wallace, the idea of covering the duo is “Armageddon,” according to Herman.

Running back room is healthier and cloudier.

Junior running back Daniel Young returned to the lineup Saturday, bringing the number of scholarship backs for Texas to two, although Young played sparingly. Once it became clear the game was steadily won, freshman quarterback convert Roschon Johnson handled a majority of the snaps at running back.

“Two scholarship running backs and a third converted quarterback playing that position very well allows you to take a deep breath a little bit in terms of the crazy contingency plans that we were all trying to dream up,” Herman said.

Johnson’s success at the position makes the decision to insert Young into the lineup a tough one. The only thing that would make it easier would be the fact that after Oklahoma State, Johnson has the decision to redshirt ­— which would shut him down for the season.

Ehlinger is playing himself into Heisman conversation.

Junior quarterback Sam Ehlinger has come into his own this season, stepping up in light of injuries.

“Sunday after last week’s game, we were like, (it) probably wasn’t (Sam’s) best game, and you look up he’s got 400 yards of total offense and five touchdowns, and you’re talking about that not being his best game,” Herman said.

Ehlinger has already surpassed 1,000 total yards and 10 touchdowns on the season, all while completing 73.2% of his passes. The LSU loss on his record is a blemish that other Heisman hopefuls don’t have; however, the statistics are there and compete with others around the country.

The largest area of growth for Ehlinger has been his control of the offense and the lack of turnovers. His number of interceptions per season has declined each year, allowing his arm to make plays rather than mistakes.

“Just his control of the offense ­— completion percentages are great and all that stuff, but knowing where to go, getting us out of bad plays and into better ones and being on time with his throws.” Herman said.