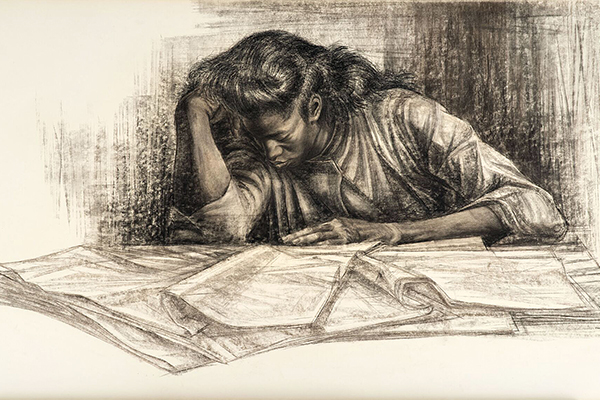 Courtesy of The Charles White Archives

For many students, the art spaces on campus represent impersonal, inaccessible institutions.

According to a statement about the exhibitions, “Legacy of the Figure” contextualizes White’s work within the canon of American modernism and examines his influence on other contemporary artists. On the other hand, “Celebrating the Gordon Gift” at the Blanton explores White’s impact on representations of black life and popular culture.

Throughout his career, Charles White remained committed to producing “images of dignity” of his African American subjects in a time when denigrating images of blacks dominated the narrative.

As a Susan G. and Edmund W. Gordon Family Fellow in African American Art at the Blanton, Phillip Townsend said that the work in the collection is relevant to current events regarding civil rights.

“There are tons of freedom and liberation movements happening right now, and this work is so reflective of that practice, of people asserting themselves (in spaces) that they normally don’t feel comfortable or welcome in,” Townsend said.

Townsend said the work is particularly accessible because of White’s realistic depictions of the human form.

“Figuration was a mainstay in his practice because it was legible. It was easy for people to read and see themselves in the work,” Townsend said.

Townsend said the hesitation of students of color to engage with campus art spaces is a historic issue.

“This exhibition is a chance for some people to see themselves reflected in the institution,” Townsend said.

Dr. Cherise Smith, the founding executive director of Art Galleries at Black Studies and chair of the African and African Diaspora Studies Department, said White’s work can serve as an accessible first step for those hesitant about engaging with art.

Although White’s work cannot be stripped of its political implications, his artwork is valuable in and of itself, Smith said.

“I want people to come see how excellent the art is, and if it influences their ideas about diversity and inclusion, all the better, but come for the art,” she said.

Government and political communications senior, Taylor-Gabri Henderson, said she feels the art is targeted at art students who can understand the concepts underpinning them.

“I don’t know if I would attend (the exhibitions),” Henderson said. “I am excited that the presence is here on campus for other black students who are interested in having it. We aren’t as present in art, so I want to support it.”