To lease or not to lease? 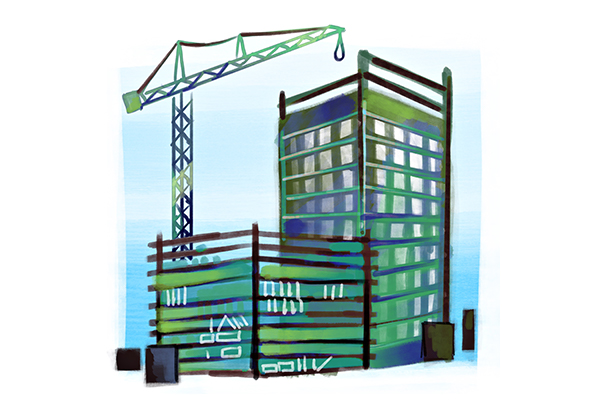 The Austin metropolitan area is always developing to support the city’s booming population, and the neighborhoods surrounding the UT campus are no exception. From West Campus condos to Riverside apartment complexes, students are presented with many alternatives to traditional on-campus dormitories.

Housing options on and adjacent to UT’s campus are diverse and appeal to the various needs of students. Many house hunters evaluate factors like location, amenities and furnishing, which help them choose between on-campus and off-campus housing.

Economics freshman Amir Shahin chose to live at San Jacinto Residence Hall on campus. He said he chose the dorm because of its amenities and proximity to campus.

“San Jacinto offers private bathrooms so you don’t have to worry about sharing with messy suite mates, and you’re close to your classes because you’re on campus,” Shahin said. “My classes are typically a 10 to 15-minute walk.”

There are many on-campus housing options with different room configurations and meal plans to choose from. The selection includes 14 University-owned residence halls, as well as several privately owned dorms.

Unlike some of his peers, civil engineering freshman Jonathan Tan elected to live in a West Campus apartment for his first year at UT.

“I chose to live in West Campus because most of my friends are there, and it’s still a short walk from campus,” Tan said. “Pricing and location definitely influenced my decision.”

Tan said he believes that compared to dormitories, off-campus housing has a better value, but it can get pricey.

“It’s spacious, and I get my own private room,” Tan said. “It’s nice to have appliances inside your unit, such as a washer, dryer and stove, which most dorms don’t have.”

For students with financial limitations who are considering off-campus housing, SMART, Safe, Mixed-Income, Reasonably-priced, Transit-Oriented, housing may be an option that can reduce monthly rates.

The city of Austin created the SMART housing program in 2000 to designate off-campus housing for students paying their way through school with the assistance of need-based scholarships, grants and loans. The program is also structured to support students working to cover their own housing costs.

Rhetoric and writing junior Austin Aléman rents a house in North Campus and commutes to school via public transportation.

“I usually take the bus because it’s free,” Aléman said. “I’ve actually grown quite fond of it and think of it as one of the calmest times of my day.”

Aléman moved from West to North Campus last year in order to spend less on housing and set aside money for his future.

“I chose to live where I do now because of expenses mostly. I wanted to save more money to help lower my student debt and also be able to live a less stressful life,” Aléman said.

Aléman encourages other students to be open to living off-campus beyond their freshman year, should their lifestyle allow it.

“There is almost this trajectory that most students follow. Once you are not a freshman, you should move off-campus and eventually move further until you graduate,” Aléman said. “I think society and the education system really just pushes students to be ever in motion.”