Opponents to watch: Wallace, Green will force Texas to come up with big plays 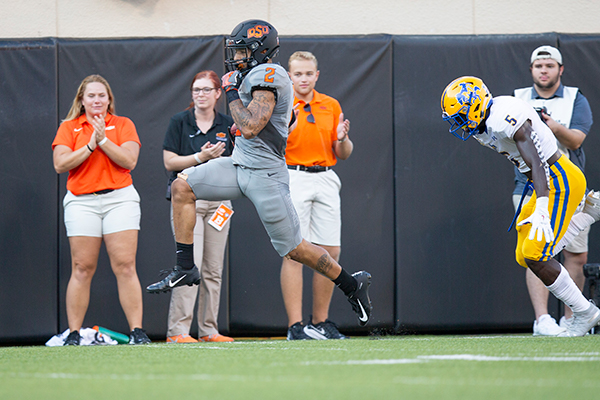 Rice was no match for No. 12 Texas last weekend in the Longhorns’ 48-13 rout of the Owls. But this Saturday, Texas will match up against a much stronger Big 12 opponent in Oklahoma State. When the Cowboys arrive in Austin this weekend for Texas’ first game of conference play, the Longhorns will be tasked with limiting a stud at wide receiver and overcoming a solid cornerback duo.

Here are four Oklahoma State players to watch for Saturday:

As a sophomore last season, Tylan Wallace established himself as one of college football’s elite wide receivers, stacking up All-American Honors. In 2018, Wallace led the Cowboys in receptions at 86, ranked second in the FBS with receiving yards at 1,491 and was third in receiving yards per game at 114.7. Last October, Oklahoma State sent then-No.6 Texas home packing in a dramatic 38-35 win in Stillwater, Oklahoma, and Wallace had a lot to do with that. The Fort Worth native gave the Texas defense trouble, recording 10 catches for 222 yards and two touchdowns. Wallace has also dominated so far this season, recording 15 receptions for 390 yards and six touchdowns through three games. Defensive coordinator Todd Orlando and the Texas defense must learn from the mistakes made two weeks ago against LSU’s talented receiving core. For this game, that means finding ways to limit Wallace.

For the past three seasons, Rodarius Williams has been a consistent player for the Cowboy defense. Last year, the redshirt junior from Shreveport, Louisiana, led the team with two interceptions. Recording pass breakups against Big 12 opponents Texas, Texas Tech and Kansas, Williams performed on big stages last year. During the Cowboys’ upset win over then-No. 7 West Virginia last November, Williams recorded six tackles that helped lead Oklahoma State to victory. Last week’s game at Rice saw Texas quarterback Sam Ehlinger pick apart the Owl defense by throwing to a plethora of receivers. Against a talented corner like Williams on Saturday, Texas receivers will have to fight harder for the ball and remain on the same page as his quarterback.

Sanders didn’t see any action last season, but now as a redshirt freshman the Denton, Texas, native has assumed a starting position. Sanders has done well for himself so far this year, throwing for 622 yards and seven touchdowns through three games. In Oklahoma State’s first two games, Sanders’s talent was on full display. However, at Tulsa last week the quarterback went somewhat cold, going 12 of 22 for 169 yards and throwing an interception into tight coverage. Week Three exposed Sanders as a quarterback who is still developing. While the Texas defense shouldn’t discount the young play-caller, capitalizing off of Sanders’ relative inexperience should be a goal.

If there’s any player on the Cowboy defense that has a history of shutting down some of the Big 12’s most dominant wide receivers, it’s senior cornerback A.J. Green. The 2018 Second-Team All-Big 12 player broke up 11 passes last season to complement an interception. One of Green’s best games last year came against Texas when he limited star wideout Collin Johnson to five receptions on 13 targets with two passes broken up. Last October’s game in Stillwater is history now, but Johnson will still need to figure out a way to find separation from Green on Saturday.