Student Government holds rally emphasizing a “UT Led by You” 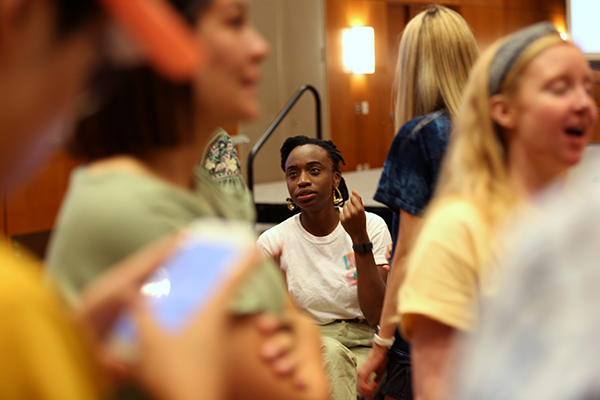 SG’s first rally for the student body featured performances from the student a cappella group One Note Stand, an interactive workshop with the Indian dance group Punjabbawockeez and addresses from finance seniors Goodman and Jean.

“One of our missions was to be externally facing, so people know who we are and what we do,” Jean said. “This is just a small start to that. We’re celebrating us not as people, but as what we’re bringing in so (everyone) can feel heard.”

Jean said SG had a closed inauguration last spring, so she wanted this to remind the student body about SG.

“We get voted in by the student body,” Jean said. “We’re not for ourselves. We wanted to create something with different groups to show we’re all here. It’s important, having a ‘UT by you’, just to remind (the students) that we’re bringing something different.”

SG administrative director Connor Alexander said planning the event took a lot of time and behind-the-scenes effort but paid off as an homage to the concept of “UT Led By You.”

“There are people who heard the ‘UT x You’ message but have slept since then,” said Alexander, a government and advertising junior. “There’s people who are living and breathing for that message everyday in SG and on campus. We just got a whole new class that’s never been exposed to this message.”

Goodman and Jean told The Daily Texan their campaign slogan focused on understanding the individuality of each student and recognizing everyone has a different path through life.

“That’s really what we want to get across in this event, that SG feels this way,” Alexander said. “We want to celebrate Camron and Amie and the history this administration has made.”

Government sophomore Jimmy Counaihan said he is a transfer student running for first-year representative and attended the rally to become more involved in SG.

“Being a transfer student, I found Camron really inspiring,” Counaihan said. “I’ve just been looking to get involved with SG, so I thought it would be a good opportunity. This rally seems to be about empowerment and realizing who you are. That’s exciting.”

Government junior Iman Serbones said they transferred to UT last year and wants to be more visible on campus.

“I decided to attend this rally to get to know my president and vice president, see how I can be more involved in my community and SG, meet more people and be social,” Serbones said. “What better way to get myself out there than by coming to events like these?”

Serbones said the University motto, “What starts here changes the world,” inspired them.

“I want to be a world changer, and I can’t do that without putting myself out there,” Serbones said. “Now that I have about two years left, I thought I could make the most of it and grow as a person.”