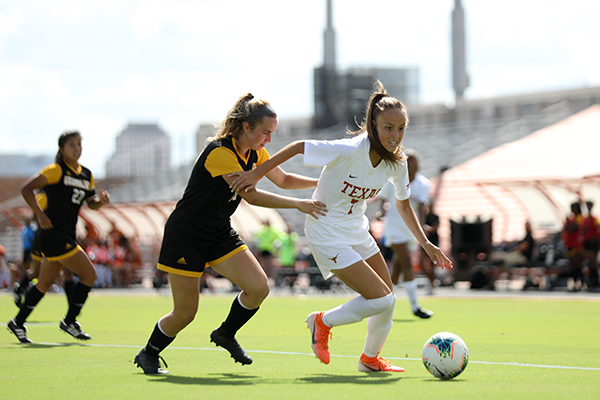 Texas scored zero goals their last two games. On Sunday, though, the Longhorns scored their most goals in 22 years.

In their first nine games, Texas has only scored in six of them, tallying 18 goals this season. Texas’ offense has lacked consistency all season, a leading factor in their disappointing 4-4 start.

However, the Longhorns made an offensive statement on Sunday, beating Grambling State 8-0. This is the most goals the team has scored since their 1997 victory over Oklahoma State.

It is no coincidence that the team displayed this level of dominance shortly after a two-game stretch that saw them at their lowest point. They were playing with a point to prove.

“It’s been an up-and-down two weeks, and we’ve had some adversity,” Texas head coach Angela Kelly said. “Anytime you have adversity, it’s all about the way you respond. There’s no response quite like putting the ball in the back of the net like they were able to do today.”

Not only did Texas score its most goals in 22 years, it also registered its most shots (30) since Sept. 2, 2016. For comparison, they had 29 in their previous two games combined. The team has lacked aggression on offense at times this season, but not against Grambling State.

“We’ve been really upset and hungry that we haven’t been getting goals,” sophomore forward Julia Grosso said. “I think that really fired us up to come out and get all those goals today. It was really nice because we got a lot more people on the goal score sheet today.”

Grosso had two unassisted goals within a minute during the first half, both being nearly identical shots from the top of the box that squeezed into the lower right corner. Despite her individual success, it was the evenly distributed scoring among the team that she highlighted — and it’s clear why.

The Longhorns had six different players score a goal, the highest amount all season. As a team who needed positive momentum heading into conference play next week, six different scorers is as good of a morale boost as any.

“I’m starting to see everyone’s individual identity come out more throughout the season, which is really excited with Big 12 around the corner,” Grosso said. “I think we need to focus on what we bring individually and coming together as a team. Our biggest thing (we need to improve) is just not living on islands and coming together to play as one.”

Even after a game that saw the team produce historic offensive numbers, it is the defensive side of the ball that still matters above all to coach Kelly.

“For me, regardless of results, it’s the defensive side first,” Kelly said. “That’s what was frustrating me in the beginning of the season, us giving up soft goals. At the end of the day, for the best teams the defense creates the offense and that’s the goal for us.”

Despite their disappointing start, this team is heading into conference play in a good place, and that’s not just because of this win. Their experience with adversity early on may prove to make all the difference.

“I think we’ll benefit from this pretty well,” junior forward Haley Berg said. “Usually, the last two seasons I’ve been here, we win everything in preseason and then we lose one game in Big 12 and everything goes straight down. This year we faced adversity early on, and now we know and we’re going into Big 12 on a high, ready to go.”