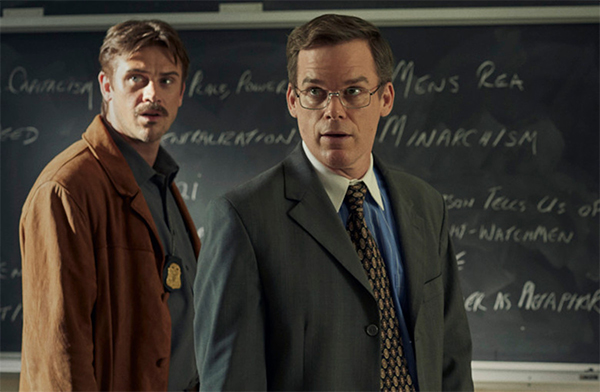 This is what happens when the moon sees its shadow.

“In the Shadow of the Moon” is a time-bending thriller from director Jim Mickle. The film follows a murder investigation in Philadelphia that twists and turns throughout several decades. Characters age and develop throughout the course of the mystery, offering a humane glimpse into their ever-changing lives.

Boyd Holbrook leads the cast with his performance as Locke, who spearheads the film as the lead investigator of the case and slowly succumbs to obsessive madness throughout the timeline. Holbrook manipulates his mannerisms and vocal tone as his character ages, reflecting the strain and determination looming over him.

Michael C. Hall is the sarcastic and selfish brother-in-law of Locke who also happens to be a police investigator. It’s refreshing to see Hall play a more lighthearted and loose character in contrast to his intense and well-known performance in the show “Dexter”.

Rya, a mysterious character who frequently pops up within the story, is played by Cleopatra Coleman. Her fierce facial performances and elegant body language add to her otherworldly character.

The beauty of the film comes from its twisted yet meticulously executed story. With every time jump, new information regarding the investigation is revealed, slowly drawing audiences to a grand conclusion. The film melds genres with ease, offering a fair share of intense cop drama, dreadful body horror and flashy science fiction.

The intense, action-packed scenes were filmed with grace. Handheld shots and rapid editing cuts convey a sense of instability and aggression. Violence has weight to it, with many characters suffering trauma and fatal injuries. Explosions and gunshots are not just thrown around carelessly.

In terms of shortcomings, the film has very few. While the story certainly feels well-contained and cohesive, its science-fictional elements can feel a tad out of place when compared to the rest of the film. Additionally, the moments in between investigative breakthroughs can feel sluggish and difficult to get through. Luckily, viewers are well-rewarded with intensive plot developments afterwards. Lastly, Michael C. Hall’s character isn’t really given much to do in regards to plot, as he only serves as the snarky brother-in-law of the main protagonist. He serves as a positive contrast with the descent of Holbrook’s Locke throughout the 30-year timeline. Both characters are law enforcement involved in a mysterious case, yet only one of them descends into madness.

Despite its time-twisting premise, “In the Shadow of the Moon” offers up compelling political commentary. It makes note of the tension surrounding police brutality and how a political overthrow brews among a society. The film presents a compelling question about how far one would go to prevent a large-scale terror event, if they had the chance.

Overall, “In the Shadow of the Moon” is a tightly written, well-acted and beautifully shot time film that combines genres of time travel thriller, cop drama, horror film and science fiction.