Fantastic Fest: The cast of “In the Shadow of the Moon” talk inspirations, acting, Willy Wonka 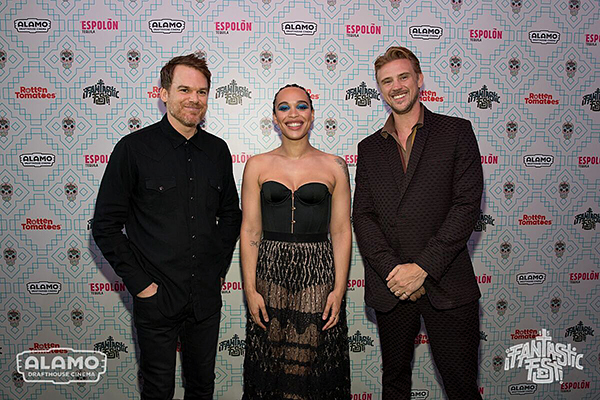 “In the Shadow of the Moon” is a time traveling thriller from Netflix. The Daily Texan discussed various aspects of the filmmaking journey with cast members Michael C. Hall, Boyd Holbrook and Cleopatra Coleman.

The film’s timeline spans over several decades as the audience revisits the main characters during different stages of their lives. Actor Boyd Holbrook, who plays Locke, said that he debated what aspects of his character should change throughout the years.

“I go down rabbit holes,” Holbrook said. “Like, should my voice be super raspy? You know, you kind of think about all these things.”

Michael C. Hall, who plays Holt, said that the aging makeup work helped him get into character and perform during the different stages.

“We had great makeup people,” Hall said. “Sometimes I would just look in the mirror and be like, ‘Okay, a lot of stuff is taken care of here. I don’t have to play older.’ Usually you try to think about the journey of your character from beginning to end. In this case, I guess it’s almost 30 years.”

“In the Shadow of the Moon” is a unique take on the murder mystery genre, incorporating several science fiction elements. Holbrook said he was drawn to the project because of these intriguing opportunities.

“There’s just so much to play in (the film),” Holbrook said. “There’s so much actor bait. There’s a lot of stuff going on, and I think that kind of shows.”

Cleopatra Coleman, who plays Rya, said that the meaningfulness of the story is what drew her to the film.

“It’s a really fun movie, but it also has a really beautiful family story at the heart of it that I found to be really moving and relatable,” Coleman said. “It was like this really rich well to play in, and how often do you get to be like a badass, you know, running around, and etc.? So much fun for me.”

Hall said he liked the script and was eager to work with director Jim Mickle again.

“I thought (the script) did some things that I’d never quite seen before,” Hall said. “But the biggest draw for me was to work with Jim Mickle again. I did “Cold in July,” a movie that he directed, like five years ago. I’d love to work with him again and again.”

In terms of inspiration for their performances in the film and as actors, the cast had a few favorites. Coleman said her performance was mostly inspired by famous heroines of the sci-fi genre.

As far as acting inspiration, Hall said one of his most influential inspirations as an actor is Gene Wilder’s Willy Wonka, though he said this didn’t specifically influence his performance in “Shadow of the Moon” specifically.

“It’s like one of my favorite performances ever,” Hall said. “I like any performance where there’s a veneer of menace underneath, seemingly pleasant behavior, or vice versa. You know, some sort of heart underneath some menace.”