Longhorns’ win comes with a price 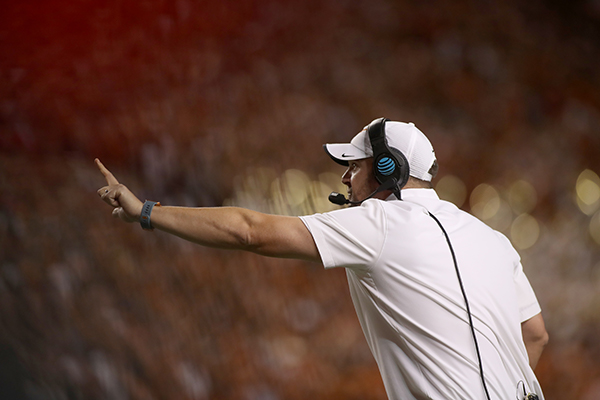 Texas was able to live up to head coach Tom Herman’s metality and start conference play 1–0. Their 36-30 win over Oklahoma State — Texas’ first win against the Cowboys since 2014 — was mixed with good takeaways and bad takeaways.

Here’s some of the key points from Herman’s press conference:

When sophomore safety B.J. Foster went down, Herman said the defensive back position was the deepest on the roster. That sentiment is being tested following the loss of three defensive backs Saturday night.

Luckily, Texas is entering a bye week, which allows a week of rest before traveling to West Virginia with a thinned depth chart. However, the team understands this week’s importance as far as returning to health.

“Great time for a bye week,” junior quarterback Sam Ehlinger said. “We’re pretty banged up, played in a lot of tough games. But ultimately, we have to get better this week.”

Thompson’s injury was known Saturday after the game. Herman told the media Thompson had “fractured his fifth metatarsal on his foot.”

Heading into the Oklahoma State game, safeties B.J. Foster and Demarvion Overshown were both ouwt with injuries. They are expected to be back following the bye week, but until then, Texas will be without four starters at a reeling position.

Ingram silenced any doubts about his confidence over the weekend. He ran for 114 yards — a career high — on 21 touches to surpass 100 yards rushing for the first time this season. He was more efficient, made cuts and spins showing off the health of his knee and was able to be the consistency the Longhorn offense needed.

“I wouldn’t call it a breakout game,” said Ingram on Saturday. “(More like) getting started, I’d say that. Heading in the right direction.”

Ingram has had a rough start to the season. He’s missed holes, dropped passes and had a couple of underwhelming games. But now that Ingram has proven his ability to stand toe-to-toe with the nation’s leading rusher, he appears poised to continue on this track.

Duvernay and Ehlinger have great chemistry

Duvernay had his second 100-yard receiving game in three weeks against the Cowboys. The majority of his catches came on third down, extending drives and keeping the chains moving for the Longhorns.

Through four games, Duvernay has become somewhat of a security blanket for Ehlinger, their shared trust growing with each pass.

“I’ve always trusted Devin,” said Ehlinger postgame. “I know if I put the ball in his area and he has a chance to go get it, he’s going to make a play.”