Stop writing off sexual harassment at the gym as harmless flirtation 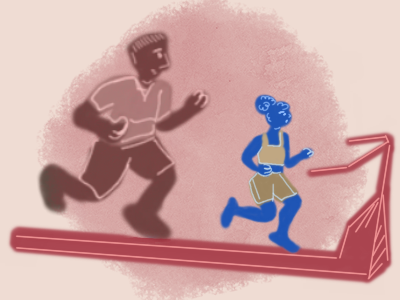 Although gym anxiety is something that both men and women experience, there is an additional feeling of discomfort that plagues many female gymgoers — sometimes it deters women from going entirely.

The part of gym culture that writes off sexual harassment as flirting and nonharmful makes the gym an unsafe and uncomfortable environment for women. To fix this, the fitness community must acknowledge this behavior as harassment and actively step in when it is occuring.

For many women at UT, going to the gym is synonymous with receiving unwanted attention — be it verbal or physical.

For applied movement science freshman Jenna Brown, this attention comes mostly in the form of unwanted stares from gymgoers.

“I never know if it’s because of what I’m wearing … I try to not look as revealing because I don’t want people looking at me as much,” Brown said.

Gyms can be intimidating for women because they’re usually filled with men, and male-dominated environments often enable harassment by sweeping it under the rug, considering it “harmless.”

“Guys will stare and look at you like you don’t belong or don’t know what you’re doing,” business freshman Karen Inngais said.

This false notion, that female gymgoers are clueless, is sometimes used as justification for sexually-charged harassment disguised as “constructive criticism.”

Undeclared freshman Ursula Pierce described an experience she had at a gym in Dallas, where a male gymgoer came up to her while she was using a machine, commented on her posture and proceeded to physically adjust her shoulders.

“It was really weird, and I left really soon after,” Pierce said. “It made me feel sick.”

All things considered, it’s understandable why many women choose to workout in female-dominated classes like barre, yoga and pilates.

Due to overflow in some of these female-dominated classes, UT RecSports facilities have had to turn some students away — myself and friends included. The influx of women in these classes presents UT RecSports with the task of meeting the demand, with an already full TeXercise class schedule.

“This fall we got back up to 130 classes a week. We see the trends of which is the most popular (and) what we need to do to accommodate,” said Jennifer Speer, senior director of communications, development and memberships at UT RecSports. She explained that because certain classes like barre and pilates require specialized instruction, it’s especially challenging to add more of those classes.

Additionally, Speer encouraged students who feel threatened or uncomfortable at UT RecSports facilities to speak with any of the facilities’ staff members about the issue.

“Our facilities are staffed whenever we’re open. Student employees walk through the buildings making rounds as well as staff in the weight room, so there is always someone there (if students need) to make a complaint,” Speer said.

Although UT RecSports is working to accommodate the demand for more female-dominated classes and address harassment when it happens, the greater fitness community is not doing enough to make women feel comfortable and safe in exercise facilities.

The first step in changing this toxic culture is to stop writing off subtle acts of aggression as “harmless” or just “flirting.” Unwanted advances and stares are examples of predatory behavior and should be treated as such. Further, the most effective way to stop harassment in action is for men to hold each other accountable. If you see or hear something, say something.

If you’ve experienced harassment, you can speak to a trained counselor by calling UT’s Counseling and Mental Health Center (CMHC) Crisis Line at 512-471-2255 or report sexual misconduct to the University at 512-471-5017.