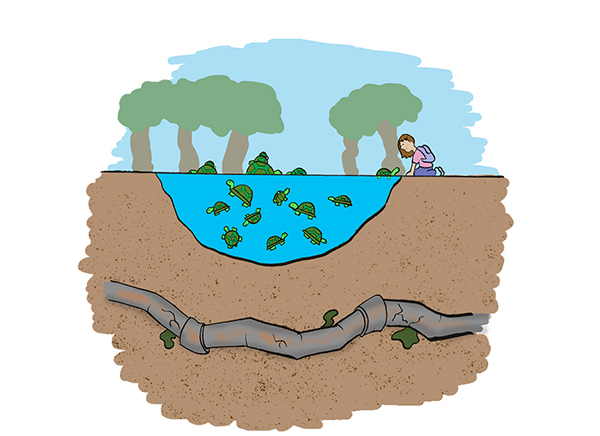 The turtle pond no longer has sewage flowing beneath it due to construction of a new sewage line, which diverts waste from the Main Building.

Jim Shrull, the sewer project manager at Utilities and Energy Management (UEM), said the sewage line from the Main Building now connects to a line on 24th Street. He said solids and liquids were flowing through the old pipelines until the sewage was cut off in the summer.

Shrull said the old sewer line, most likely built in the 1930s, has a significant sag in the middle, but the management could not reach it for maintenance without destroying the turtle pond.

“We would not have been able to repair it,” Shrull said. “In an emergency situation, the Main Building would have been uninhabitable because they would have no sewer service, (and) the turtle pond would have been contaminated.”

Despite the sag, Shrull said the old pipes do not have leakages or breaks. Shrull said the management is expecting the construction of the new line, which is taking place behind the Main Building, to be finished on Oct. 5.

Shrull said the construction is part two of a two-phased sewage line renovation project, which will cost an estimated $1 million. As part of the project, he said Utilities and Energy Management previously rerouted the flow from Hogg Memorial Auditorium, The Texas Union and the Flawn Academic Center to the line on 24th Street because of similar access issues.

“We survey our sanitary system every five years,” Shrull said. “This is one of those systems that we highlighted a couple of years ago, and we finally got the funding together to fix it.”

Environmental science professor Jay Banner said old sewer pipes are not just a problem at UT but in cities around the country. Banner said in his research on Waller Creek, he found aging infrastructure can affect water quality by releasing materials, such as sewage and heavy metals, into the surrounding bodies of
water.

Plan II sophomore Lori Woo said when she was first touring, the first place her sister showed her on campus was the turtle pond. Since then, she said it has become her favorite place on campus.

Woo said she studies the unique ecosystem of the turtle pond in her introductory biology class and hopes the pond will continue to be well-preserved.

“I love the turtle pond,” Woo said. “Sometimes on my way to class, I stop by here to journal and meditate. It has become an important part of campus to me, and I hope it and the turtles are well taken care of.”