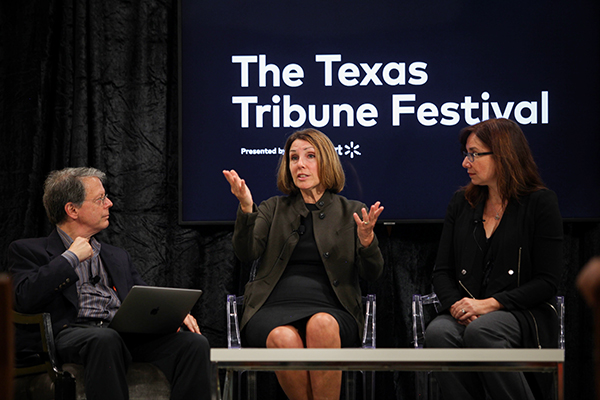 “The issue of who is responsible for climate change is one of the most polarizing issues in politics,” Hayhoe said. “When there's such glaring evidence that humans are the ones at fault, it's hard to believe that this is such a partisan issue.”

Ahead of the 2020 presidential election, Hayhoe and fellow climate change expert Amy Myers Jaffe discussed the science behind global warming and how related issues are handled in today’s political sphere at a panel during the Texas Tribune Festival.

Hayhoe said even though climate change has become a highly debated and partisan issue, there are more than 26,500 pieces of individual evidence that support the idea that the Earth is warming.

"You don’t have to use thermometers, satellites, ocean buoys or other scientific tools of measurement to gauge climate change,” Hayhoe said. “If we simply use our own eyes … we see melting glaciers, invasive species spreading across Texas, stronger rainfall, earlier bloom times, rising sea levels. This is all evidence of a warming planet.”

Jaffe said climate change should not be a partisan issue. She said there are multiple solutions which fall between party lines, including the elimination of landfills and use of algorithms to ensure reliable public transport to all communities and cut down on carbon dioxide emissions.

Jaffe said it is also important to hold individuals accountable for climate change action, especially by voting for a candidate who prioritizes the environment.

“People need to talk to other people in whatever community they’re in, whether it be a professional community, a church community, or even a neighborhood,” Jaffe said. “Even at the most local level, champion candidates that focus on doing the best they can for the environment.”