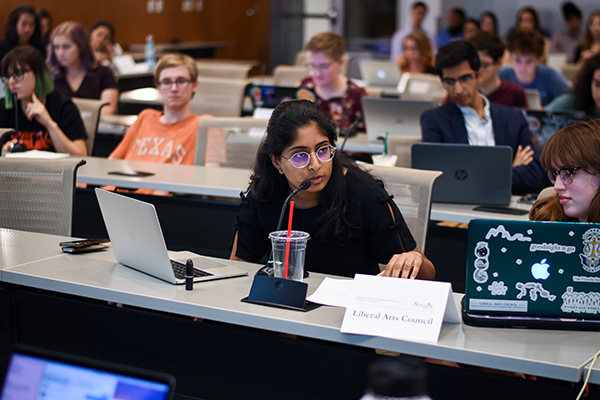 UT Senate of College Councils introduced legislation to create a form for student feedback on Quest, an online learning platform, at its Thursday meeting.

Professors use Quest, a program that UT developed, to assign homework, report grading and provide textbooks to students. The authors of the legislation said if the form is introduced, students can report their complaints about using Quest so that the company can focus on fixing what students consider to be the platform’s biggest problems.

Senate policy director Hussain Alkhafaji was the main author of the legislation and said Quest administrators reached out to him over the summer about receiving student feedback.

“They said they know there are things they want to fix about their platform, and they don’t have that many resources, so they want to prioritize what they work on,” said Alkhafaji, a public health and journalism senior. “So, initially, (this legislation) was helping them prioritize where their work is best suited.”

Neuroscience sophomore Rhea Sachdeva co-authored the legislation and said it would help students in the College of Natural Sciences. CNS uses Quest more than any other University college, according to the CNS website.

“It’s used in a variety of math, physics and chemistry classes, and it’s used in conjunction with Canvas,” Sachdeva said. “But it doesn’t have any type of way to streamline the process of gathering feedback from students.”

Alkhafaji said Canvas has more resources and is a competitor to Quest, but Quest still has different features than Canvas. The features include modules that can embed videos and portions of the textbook with relevant quizzes, he said.

“There’s a couple reasons professors use Quest,” Alkhafaji said. “Some are just used to it, and they don’t want to change from it, but there are certain things Quest does that many instructors feel is still the most optimal approach.”

Alkhafaji said despite its advantages, students find the costs of Quest, which vary depending on the course, hard to ignore.

“Over the course of a couple years, less classrooms are utilizing Quest, and the majority that are just use it to publish exam grades,” Alkhafaji said. “And even that tool is not being optimized to its best capacity.”

Alkhafaji said the Senate cannot require professors to administer the feedback form, but the legislation, which had administrator support, would make administering the form feasible.

“Often, Senate doesn’t have the power to mandate anyone to do anything,” Alkhafaji said. “We see what approach works best to actually see if something can come to fruition. Part of that requires that when we meet with faculty, we walk away with support from them.”

“Any change, as long as it’s a good change, is beneficial,” said Ivanova, a public health, government and Plan II senior. “We’re always aiming to make those big systemic changes, but we can’t always do that. Just fixing the infrastructure and allowing students to provide feedback and get more engaged can start a domino effect.”