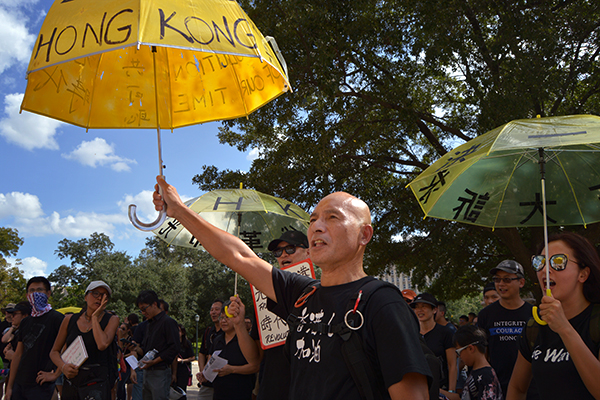 Nearly 100 students, children and families dressed in black and carried yellow umbrellas during a rally at the Capitol Sunday to speak out against reports of human and civil rights abuses against Hong Kong protesters.

Austin has one of the fastest growing Asian communities in the U.S., according to the 2016 City Demographer’s Provisional Report. Public health freshman Jessie Hui said she thought it was weird that a rally was not being planned for Sunday and decided to organize one herself because the movement is personal to her.

“I grew up in Hong Kong and moved here in 2007,” Hui said. “I’ve lived in Texas longer, but Hong Kong has always been my home.”

During the rally, students chanted and lined the south steps of the Capitol holding posters illustrating five demands. The five demands include withdrawing the extradition bill, discarding the “riot” characterization of protests, inquiring police brutality, releasing those who have been arrested and implementing universal suffrage.

“My biggest intention with the rally is to let (Hong Kong) know they don’t stand alone, that around the world there are people supporting them,” Hui said.

UT history professor Madeline Hsu spoke at the rally and said she was proud of the students who participated.

“Due to the repression of legitimate political expression, I am so admiring of these students that are taking these steps to bring people together to express these really important causes,” Hsu said.

Chemical engineering sophomore Michael Montez said he visited Hong Kong over the summer and wanted to support the close friends he had made there.

“It seems like in America, people don’t care that much, but Hong Kong is struggling with something so core to the American identity — democracy and suffrage,” Montez said.

Hui said she was so touched by the turnout at the rally and was close to tears from the beginning.

“Honestly, I don’t think that (the Chinese government) actually cares about any protesting, but it’s something we still have to do regardless,” Hui said. “Don’t underestimate us.”