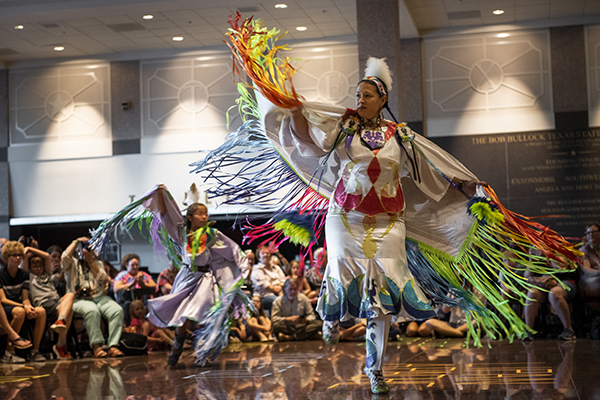 Women danced in dresses covered in metal ornaments to the sound of a beating drum as part of an on-campus celebration of American Indian Heritage Day.

Before the performance, Kaitlin Lloyd, museum external affair committee co-chair said museum visitors could walk through “Becoming Texas,” an exhibit that shows how Native American culture is being passed on through generations and reviews Native American history from more than 16,000 years ago.

“A lot of the kids may see some of the things in the museum and think Native Americans were a thing of the past, but then we come and show them we’re still here (and) we don’t dress like this every day,” Blassingame said.

Shante Crommie, Great Promise volunteer marketing staffer, said the museum event is a precursor to The Austin Powwow held on Nov. 2, which brings Native American communities from across the country to Austin for food and activities. Blassingame said this year will be the 28th annual Austin Powwow.

“We like to have events like this where we’re representing and showing fellow Austinites that we’re here, the culture is still alive, and we’re sharing that culture with the community,” Crommie said.

Event attendee Sasha O’Daniel said she brought the metal ornaments, or jingles, for the dresses used during the performance as a way of preserving culture.

“I had no use for them, but I didn’t want to sell them or anything,” Sasha said. “That didn’t feel right. To me, they’re regalia.”

Patrick O’Daniel, Sasha’s husband who also attended the event, said he is from New Mexico where he was surrounded by Native American culture, but it is not like that in Texas.

“I love the fact that the Bullock Museum provided a space for (the organization) to be able to teach about the culture and share it with everybody, because it’s important,” Patrick said. “This is something that you don’t get to see every day.”