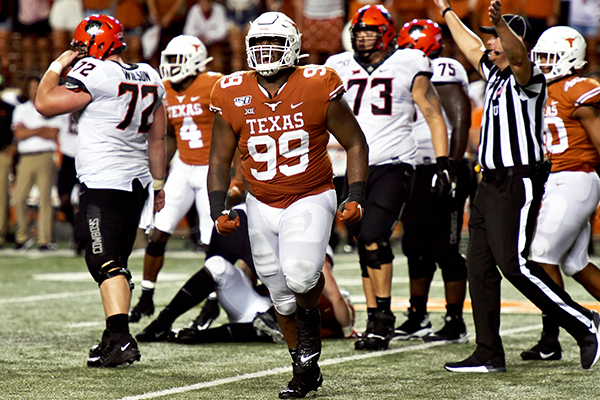 When defensive lineman Keondre Coburn stepped in front of the media on Tuesday, he looked relaxed. Dressed in black athletic gear and slides, Coburn had just arrived from an introductory history midterm, something he had been studying for during the bye week.

“I think I passed,” Coburn said.

For the redshirt freshman, every minute of the bye week was precious. He slept every chance he could and even missed the Clemson versus University of North Carolina Chapel Hill game due to his fatigue. He said he was pretty upset about that.

But even in a bye week, Coburn couldn’t get his mind off of football. Some players turned off their televisions and took a break from the game, but Coburn watched every game he could.

“When I started liking football when I was little, I just never stopped wanting to watch it, and the chance to watch multiple football games is that something I love to do,” Coburn said.

His love for football has translated onto the field for everyone to see. Head coach Tom Herman and Coburn’s teammates feel that he is finally stepping into his role and becoming a leader for the Longhorns.

“I don’t know what it does for opposing play callers, but I just … I love the way that (Keondre) comes to work every day,” Herman said. “He’s got two speeds: full and off. When he’s on the practice field or game field it’s ‘full,’ and I think his demeanor and his likeability … I told him the other day that if he takes care of his business off the field, because of his work ethic, his level of play and his demeanor, I could certainly see a scenario where that guy would be a captain before he left here, and that’s always good.”

According to Coburn, he has graded out as a champion and completed 85% or more of his assignments against Rice and Oklahoma State. This is a huge feat for any player, but especially a second year lineman. He’s already had one sack against the Owls and six total tackles so far this season.

Senior captain Malcolm Roach has seen a change in Coburn and is watching him come into his own on the defense.

“Just seeing the way he performs when he takes it serious, you know, versus when he’s out there playing around and things like that, (he’s a) totally different person,” Roach said. “I think he’s going to get better and better at it the more time he spends on campus, the more time he spends growing up. I think he’s only 18 or 19 years old … he’s going to be a good one.”

Still under Roach’s wing, Coburn has a lot of learning to do. But soon enough, Coburn could take charge of Texas’ young defense. Though his time has not come yet, he’s still flattered his teammates and coach think so highly of him.

Earlier in the week, Herman expressed how he can see a future where Coburn could be a captain of not only the defensive line but for the entire team.

“It’s a big compliment,” Coburn said. “But I feel as though if I’m being a captain, I don’t want to be a leader where I tell everybody what to do. I just want everybody to flow and … they can talk to me anytime. We did this thing in the d-line room where (we were asked), ‘What is a leader to you?’ Leadership to me is pretty much just somebody being there and doing everything right, and I know I can rely on them if I need anything. So that’s how I feel. I just want to be that type of leader.”