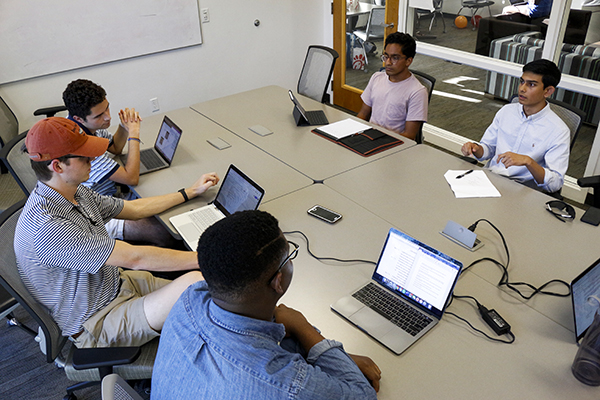 Freshmen elected Puranik, a government and Plan II freshman, and government freshman Isabelle Riback as the campuswide first-year representatives Sept. 27. Voters ranked the eight candidates, and Puranik received about 23% of the first ranking. Riback received 18% of it.

At two hearings on Sept. 23 and 26, other candidates alleged Puranik’s campaign submitted financial disclosures late and inaccurately and violated social media election code after posting in the UT Class of 2023 Facebook group. Puranik admitted to the violations in both hearings.

“We want to facilitate the electoral choices of students,” said Dodson, a Plan II and business junior. “Unless something truly undermines the democratic integrity of the election, we’re going to do our best to let the electoral tides flow as they may.”

During the first hearing, Puranik said he believed his agent could submit financial disclosures for him and found out she could not after they were due. He said in his rush to submit them, he forgot to include an $8 bag of mints, which his campaign passed out to students.

“There was no nefarious motive or action I took behind buying $8 of mints,” Puranik said during the hearing. “We weren’t trading them for votes. We were just telling students what my campaign is about and giving them flyers. I’m not going to lie or give an excuse, but I don’t see it as a big bargaining chip to my base.”

Candidate Roosh Bhosale filed the complaint about Puranik’s financial disclosures. Bhosale said Puranik’s defense did not make sense because the rule of who can disclose financial information was covered in an earlier meeting.

“I do believe the candy was the main gravitation to follow the campaign (on social media),” said Bhosale, Plan II economics freshman, during the hearing.

The court decided Puranik committed a violation and imposed a 12-hour ban on his campaign from midnight to noon on Sept. 24.

At the second hearing, candidate Benjamin Farias alleged someone in Puranik’s campaign posted campaign-related content on the University of Texas at Austin Class of 2023 Facebook group, which is an election violation. The court decided Puranik had committed a violation and reduced his campaign expenditure limit by 30%.

Puranik said having a large campaign team partially contributed to the violations as it was more difficult to manage problems.

“I loved having a big, diverse team, but it was a little bit problematic in not being able to specifically know what everyone was doing or saying,” Puranik said. “I don’t think the few mistakes I made undermined the values I want to ingrain at UT.”

These hearings were the first examples of the court relying only on candidate complaints to enforce election code, Dodson said.

“Hearings are about having a conversation about what happened,” Dodson said. “All parties that were involved did a good job coming to have a frank discussion and, overall, the process worked as intended.”