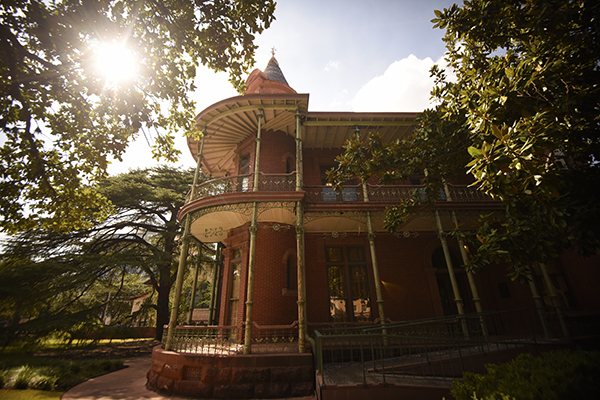 For over a century, the Littlefield Home has collected history on the corner of Whitis Avenue and West 24th Street. With immaculate details, such as carved staircases and antique family paintings, on the interior, the house’s dramatic exterior draws the attention of students rushing to class. Despite its formidable presence on campus, the building remains a mystery to students.

Built in 1894, Littlefield Home is one of the oldest buildings on campus. Major George Washington Littlefield and his wife, Alice, built the red Victorian mansion for their family and its future generations. Now, the building houses the University Events office.

David Gracy, a Littlefield family descendant and School of Information professor emeritus, said the home accommodated about 30 of Littlefield’s nieces and nephews while they attended UT in the early 1900s.

“As the patriarch of the family, Littlefield considered it his responsibility to provide an education for his family’s descendants,” Gracy said.

To commemorate the centennial of his great-great-uncle’s death, Gracy said he is authoring the first full biography of Littlefield, which will retell the family’s history and include new information. It will be available on Nov. 7.

Littlefield, a Civil War veteran and Texas rancher, banker and businessman, began donating to UT in 1897 and served as a regent from 1911 to 1920. After his death in 1920, Littlefield left the house to Alice.

In joint wills, Gracy said the couple left the house to the University once they both passed away. The building became part of campus after Alice’s death in 1935.

Due to its largely unknown history and intimidating appearance, rumors about the house being haunted began circulating after a student visited the house one dark Halloween night more than 14 years ago and told tall tales of the visit.

Gracy said the stories told about that night, and all others, are pure fabrication. When the University posted the rumors on its website, Littlefield descendants protested and requested that they be taken down to preserve the family’s legacy.

Although George, Alice and their housekeeper passed away in the home, Ashleigh Osburn, journalism junior, said she had no haunted experiences when coordinating a Halloween event at Littlefield for her professional spirit group, Texas Belles, last year.

“I heard some rumors about Alice’s nervous breakdown,” Osburn said. “When I took a tour of the house, I expected it to look eerie, but it was gorgeous. There was a sense of spookiness only because the decor was old and typically old is associated with spooky.”

When asked to comment on the rumors, executive director of University Events, James Hooker, denied the Texan an interview with employees who work within the home, so as not to encourage the rumors.

“Part of that could be (because) Haunted ATX includes the house on their tour,” said Susan Threadgill, associate director of production for University Events, in an email. “I can’t count how many times I have interrupted their tour to make them move their hearse out of the circle drive.”

With donor relations being as vital as they are, Threadgill said the University tries to respect the wishes of the founding donors and the intention for the land on campus.