Young Longhorns are hitting their stride at perfect time 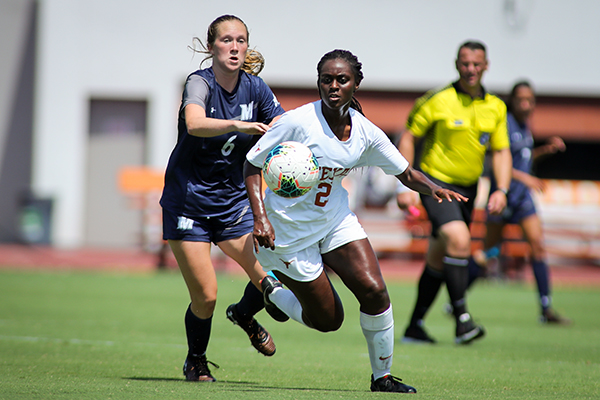 Texas currently sits alone atop the Big 12 with a conference record of 2-0 after winning back-to-back games in their recent Kansas road trip. After a rocky start to the season, they have found their stride as conference play begins. Texas will look to keep this positive momentum rolling when it faces off against TCU and West Virginia this week.

The Longhorns are entering the most important stretch of their season with senior forward Cyera Hintzen back in the lineup, whose absence earlier in the season played a big role in the team’s 0-4 loss against Monmouth. Head coach Angela Kelly viewed this as a turning point in the team’s season.

“That (game) was an anomaly, but we learned from that,” said Kelly. “It was unacceptable. It’s fair to say they’ve found the grit since that moment.”

Getting healthy and playing at full strength has played a big part in the team’s recent success after that loss, but it is the development of the team’s younger players that has stood out the most.

"I can’t even tell you (how far our youth has come),” Kelly said. “If you go through any of the sophomores or freshmen that we’ve been playing, their eyes have really been opened to the speed of play, to the tactics, and there has to be a rate of absorption that takes time. With this baptism by fire, you see the likes of the Carlee Allen who are now understanding when they shouldn’t be pulled out of space, when they’re absorbing a player. The communication is fantastic.”

Kelly also highlighted the play of senior defender Atu Mshana and the role she has played in turning the team’s defense around with her play at center back. The Longhorns aren’t giving up as many opportunities to opposing teams. Instead, they are tightening the lines and forcing opponents into uncomfortable situations.

Although Texas and its youth are turning in the right direction, they are only two games into conference play and have a long road ahead. The next two stops on that road will be difficult tests for the newly rejuvenated Longhorns as they face the Horned Frogs and the Mountaineers.

Both TCU and West Virginia play at a conservative pace, preferring to keep the ball on their side of the field as much as possible. This is a challenge, but one that Kelly is confident her youthful squad is prepared to face.