Longhorns remain undefeated in conference play after win against TCU 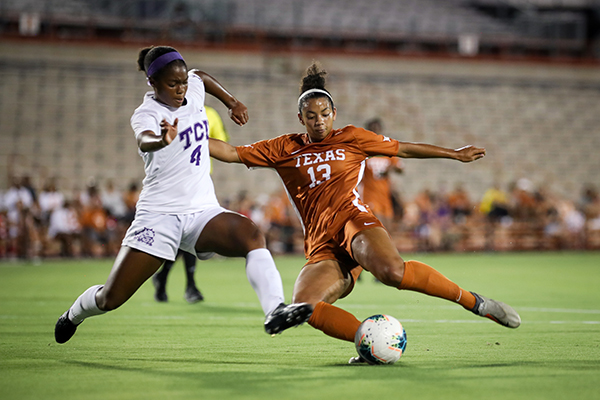 After a nail-biting bout to the finish with TCU, the Longhorns prevailed 1-0, and now Texas soccer is the lone undefeated and untied team in the Big 12, sitting in first place with a conference record of 3–0.

The game was a tale of two defenses for much of the night and wouldn’t be decided until the 87th minute when senior forward Cyera Hintzen scored the game’s only point, propelling Texas to victory.

The goal was a result of a two-on-one break that eventually led to junior forward Cydney Billups finding Hintzen one-on-one against the opposing goalkeeper, a matchup that didn’t bode well for the visiting Horned Frogs.

“I heard Cyera screaming her face off, and I knew as long as I get it into any type of space she’ll get there,” Billups said. “Having a player as great as Cyera, I can literally play the ball into any space and she’ll make me look good.”

Hintzen was able to come through for her team when it mattered most against TCU, but she wasn’t awarded that opportunity earlier in the season. Hintzen missed three games during the team’s nonconference play, two of which ended up as losses.

“We struggled with adversity early in the season,” Hintzen said. “It was hard to handle (not being there), and it was hard to watch. We weren’t playing as well as we could have. But being back is great — getting a feel for the team again, playing with the team. I’m just happy to be able to come through for the team whenever they need me.”

Now that Hintzen is back in the fold, Texas is performing better than ever, as evident by their three straight conference wins — all of which were decided by one goal in the final 20 minutes of play. Hintzen has scored two of those three goals.

Texas has now held its opponents to four straight shutouts, which is the first time that has happened since 2008. Hintzen and the rest of the offense has been able to succeed off the strength of these defensive performances, particularly by senior Atu Mshana. Kelly highlighted Mshana’s play earlier in the week, crediting her for turning the team’s defense around in the second half of the season. Mshana continued that level of play against TCU.

“Atu Mshana reads the game so incredibly well,” Kelly said. “She steps in channels, she steps in serves.”

“It makes us feel really confident,” Hintzen said. “Having that confidence all over the field and the trust that we can count on our back line and the back line can count on us going forward is really big. It’s something that we’ve changed throughout this season.”