On being “not queer enough,” struggling for acceptance 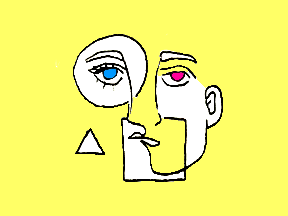 “I’ve never even seen you kiss a girl,” said the guy that I had been casually dating, just within the past few weeks. “You can’t be bi.”

“That doesn’t mean it doesn’t happen when you’re not around to see it. And it doesn’t make me any less queer,” I replied defensively.

That wasn’t the first time someone has called into question my attraction to the same sex, just because they haven’t seen me dating another woman with their own eyes or engaging in physical touch in front of them.

As if a physical act of affection between myself and another person is seen as some kind of performative requirement to validate my self-identified sexuality.

And yet, nobody requires a body of proof when I am dating a man; they don’t even question it.

It is not only assumed that I would be attracted to men, but rather a reality that is beyond reproach in an outsider’s perception of my very own identity.

When same-sex marriage was federally recognized as a human right, I rejoiced like many other queer folks did, and rightfully so.

However, I remember distinctly having a straight friend ask me why I was so happy, telling me that I would never marry a woman and was obviously going to end up with a man anyway, so what did the decision matter to me? My own life choices were being decided upon in that moment without my active participation because of that friend’s heteronormativeassumptions and clear disregard for my life choices.

Even in queer-accepting spaces, I’ve been subjected to this flash judgment that I am not quite queer, that I must be an ally taking up space within the community.

Maybe this is because of my outward appearance. I do not exhibit the style and physical aesthetic of a stereotypical queer woman — although I admittedly do wear a ton of flannel and backward hats.

And while many in the gay and straight communities do a really good job of not assuming identities based on stereotypes, it is still human nature to subconsciously categorize another person.

In the past, when I’ve had conversations with other queer folks and reveal that I’m in a romantic relationship with a man, I’ve had the conversation quickly steered away into another topic, with an unspoken stillness in the air.

At those times, I feel as though I can’t win. That I’m just not queer enough for anyone — not for the queer community and definitely not for the straight.

While I know I have nothing to prove to these people that may scrutinize me, verbally or not, it feels as though I have to operate in the gray zone between straight and queer, never fully accepted by either side.

For myself and a lot of others that are attracted to more than one sex or gender identity, having a part of ourselves that took so long to come to terms with, to fully explore, to understand, and be able to accept and live as our most authentic self is a truly wonderful thing.

But when something so positive continues to be called into question in almost every possible context, it can become grating and exhausting.

This is not to say that I have not experienced amazingly supportive straight and gay friends and communities that are understanding, accepting and everything a queer person could want in their own journey, because I have and continue to do so.

But there is something to be said for the way that certain identities under the queer umbrella — bisexual, pansexual, etc. — are called into question for not being enough of something for someone.

My love and attraction for others knows no gender bounds. I am here. I am enough.

And maybe more importantly, to me, I am queer enough.

Sodic is an education graduate student.