Herman looks back on history, tradition behind Red River Rivalry 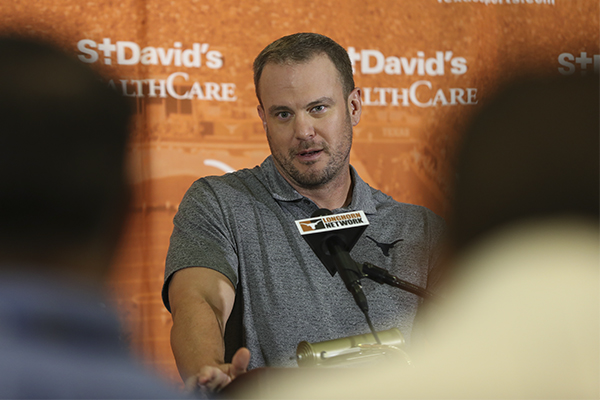 Head coach Tom Herman has seen and worked in great college rivalries since the start of his career. He experienced the Michigan-Ohio State rivalry firsthand while he was the offensive coordinator and quarterbacks coach at Ohio State. He’s been a part of the Battle of the Piney Woods, a 94-season rivalry between Sam Houston State and Stephen F. Austin State University.

And of course, the Red River Rivalry.

Though this is Herman’s third Red River Rivalry as head coach, his first memory dates back to 1999, when he served as an offensive graduate assistant at Texas.

“My first memory … as a (graduate assistant) riding through the State Fair (of Texas) … (I was) looking out the window at this elderly lady that had to have been 80 years old going double bird to the Texas bus,” Herman said. “Then next to her was a, couldn’t have more been than eight-year-old boy, going double bird to the Texas bus … It speaks to the intensity of the rivalry. It crosses a lot of different generations.”

Since Lincoln Riley and Herman were hired as head coaches at OU and Texas, respectively, for the 2017 season, Riley has churned out two Heisman trophy winners in Baker Mayfield and Kyler Murray. Now in Week Seven, Jalen Hurts is a Heisman contender, and Herman recognizes Oklahoma’s offensive threat.

“I think we have done an admirable job in all three games, including in 2017 when we weren’t really good. We held them to significantly less (than) their season average in terms of points allowed,” Herman said. “(You) are not going to shut Oklahoma out. This is not going to be a 10-7 ballgame. (We) have got to get critical stops.”

But as Riley has produced two NFL quarterbacks, offensive coordinator Tim Beck and Herman have developed junior quarterback Sam Ehlinger. The freshman who had a 48.7% completion rate against the Sooners in 2017 has grown into the team captain who passed for over 400 yards against LSU. According to Herman, he and Ehlinger have developed a strong bond over the years.

“My admiration, affection, love for Sam Ehlinger I hope is very well-documented,” Herman said. “I love him like a son. I’ve just been so impressed with his development as a player. We knew all of the intangibles were there as a young freshman but to see him develop into the quarterback that he is has been really impressive.”

Herman has been a part of many historic rivalries, but even though he’s seen games such as Michigan against Ohio State, the Red River Rivalry stands out as the best game in college football.

“It’s been pretty cool to be a part of all of those, but this one takes the cake just because of it being interstate rivals,” Herman said. “The two states in general don’t get along very well. I think it’s cool that it’s always on our soil. Everything that surrounds the game makes it one of the best, if not the best, games in college football.”