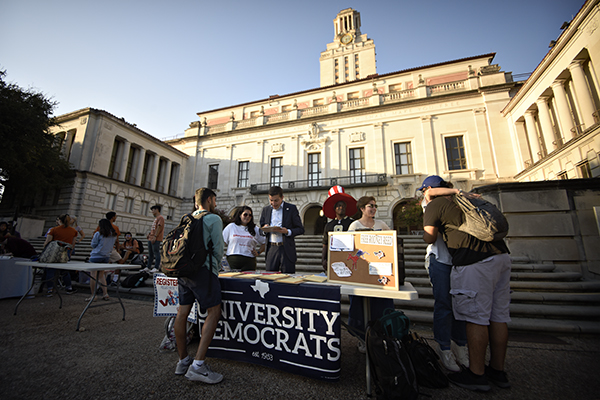 State Sen. Kirk Watson and UT civic engagement groups gathered at the UT Tower Monday night to register students before the midnight deadline to vote in the November election.

As members of TX Votes, University Democrats, Texas Rising and other groups registered students, Watson spoke to students about the power he said their votes have.

“The way you’re helping others will be very important,” Watson said. “Student engagement is rising for a variety of reasons, and I think it’s because your future depends on it.”

“We like to have guest speakers and dance parties to get people out and engaging with us,” Zhang said. “We’re all people people, so we’ve got a lot of energy to keep this going. It’s not going to fizzle out at 10 p.m.”

“Texas makes it much harder than it ought to be to register to vote,” Watson said. “There’s nothing people don’t go online to do, except when it comes to the most fundamental aspect of what we do as citizens, which is voting.”

At the Nov. 5 election, 10 amendments to the Texas Constitution will be on the ballot. The proposed legislation includes the creation a flood infrastructure fund, prohibition of individual income tax and permission of municipal judges to hold more than one office at a time.

“The student voter mobility in Austin is amazing, but I caution students in times like this that you can’t assume you don’t have to vote just because everyone else is picking up the slack for you,” said Bruce Elfant, the Travis county voter registrar. “The higher the turnout, the more representative the outcome.”

Chemistry junior Zhang said the organization reported around 4,000 student registrations since they began tabling in late August. He said voter registration matters to him because he wants more minority students engaged in the voting process.

“I noticed there weren’t a lot of students like me out there voting,” Zhang said. “I wanted to encourage more engagement among Asian American students on campus and make the voter pool a little more representative.”

Zhang said he felt optimistic that ultimate turnout in November would be as high as the previous year. Watson said there was 54.8% student voter turnout during the 2018 midterm election.

Elfant said Travis County added 30,000 registered voters so far this year, and he believes 2019 voter turnout will remain as high as last year.

“Normally, the odd years are quiet,” Elfant said. “It’s hard to get anyone to do anything because they’re tired from the previous election. Travis County is that shiny county on a hill people in Texas point to for success.”

Tori May contributed to this story.