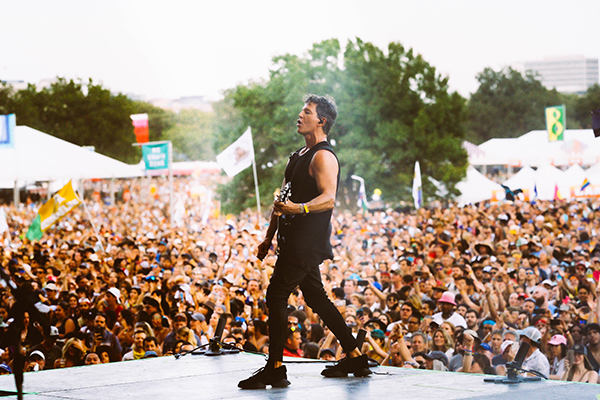 Kryz Reid joined rock group Third Eye Blind in 2010 as lead guitarist and backup vocalist. Hours before the band’s Austin City Limits Music Festival set on the Honda stage, the Irish-born musician sat down with The Daily Texan to discuss joining the band, their evolving sound and classic tracks.

Daily Texan: Third Eye Blind has been making music since the 1990s. How has your sound evolved to relate to your longtime fans while also bringing in a new generation of fans?

Kryz Reid: I’ve always said whatever music we make, whatever sound, once you put Stephan Jenkins (lead vocalist) on top of it, it’s Third Eye Blind. There’s a track on our new record called “2X Tigers.” It’s a song Stephan did with Brian Fennel from the band Barcelona, and it’s kind of like a trap song. Stephan sings with very heavy auto-tune, and it’s awesome. But what’s crazy is it sounds like no other (Third Eye Blind) song ever, but once you have Stephan on top, it is. I think that moves through every genre the band covers.

DT: The song “Semi-Charmed Life” discusses some pretty dark topics, but the message is disguised by an upbeat tune. What is the intention behind this style?

KR: We wrote a song about crystal meth and nobody worked it out. Our drummer Brad (Hargreaves), his wee boy is four, and it’s his favorite song. He calls our band the “doo doo doo band and Uncle Kryz,” because I’m his favorite. When we play (“Semi-Charmed Life”) live, if he’s at the show with his little headphones on, as soon as we start playing, he’s up and jumping around. I was like, “That’s nuts!” but Brad said it’s the perfect song for a four-year-old. It’s just something clever that Stephan does. He’s lyrically very smart like that, making the topic mainstream.

DT: The band has recently done a run of festival performances including Lollapalooza in 2016 and now ACL. How do these performances compare to a standard tour?

KR: Well, for one, we always steal the audience. Whenever we play a festival, it’s like every f—er at the festival (is looking at our stage). We did Lollapalooza in Chicago in 2016, and you could see all the way to the other stages, and they were all looking (our) way. It was crazy. We’d of course love it if we had our tour bus ­— it’s a certain luxury you get used to on tour. We just walked in here and saw all the tour buses out there, and I was like, “F—ers!” but I can’t complain. When we’re touring for two months and there’s a festival in the middle, that’s when you roll into it super greasy. The band is just destroyed, and we roll out in our bus after the festival.

DT: Austin has a huge population of musicians trying to get their big break. What advice would you offer to young people trying to get into this industry?

KR: People migrate toward what they want to do. We did a festival during the summer, and there was a school of rock — wee boys and girls. We were shooting a video for a song called “The Kids Are Coming (to take you down)” on our new record. It’s kind of a call to arms for climate change. So we were shooting the content, and I was like, “This is a rare opportunity, we have this sea of young rock kids.” I was just looking at the tour bus and thinking we can just set up here and get them to sign the release. What I noticed when I was watching the kids go by was, “There’s me,” and then I thought, “There’s the little guy who’s going to be a drummer; there’s the wee girl who’s taking the pictures; then their mate who’s maybe a little chubby with glasses, but he’s in charge.” That’s what I find fascinating about human psychology. People migrate toward what they find interesting. I looked at them ­— they’re all just sorting out their roads. The lead singer already has it figured out, the drummer’s a little dorky, but they’ll compartmentalize. They’ll sort it out without anyone like me telling them what they need to be.