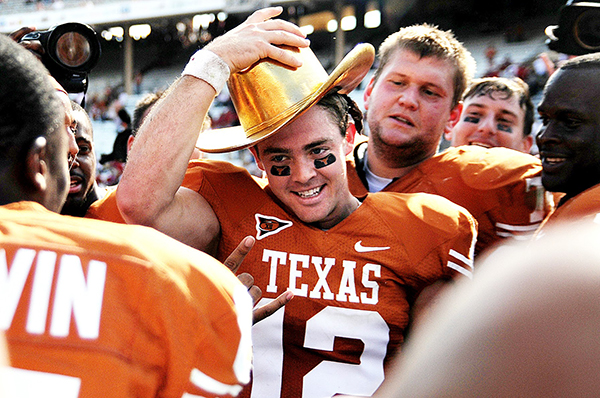 With No. 11 Texas and No. 6 Oklahoma heading to the Cotton Bowl for the 115th installment of the Red River Showdown, The Daily Texan staff has ranked Texas' five best wins in Dallas.

It is October 2008 in Dallas, Texas, and the 103rd annual Red River Rivalry game is in full swing. Both teams are 5–0 going into their Week 6 matchup, Oklahoma ranked No. 1 while Texas sits at No. 5.

Oklahoma, led by quarterback and future heisman winner Sam Bradford, took an early lead over the Longhorns with a score of 14-3 in the second quarter. Oklahoma was coming off a scoring drive, where their touchdown was almost fumbled by tight end Jermaine Gresham but caught inches from the endzone by wide receiver Ryan Broyles.

Freshman punter Matthew Moreland lined up for the kick, OU fans cheering “Boomer Sooner.” Cue the cannons, the ball was in the air, and it soared into the arms of wide receiver Jordan Shipley at the 5-yard line. From there, Shipley took off into the scrum of players but found a hole big enough for him to rush through. He left behind a pile of Oklahoma players and kept running, seeing nothing but green grass until he found himself in endzone.

Touchdown Texas. A 96-yard punt return that would go down in Red Rivalry history and would help secure Texas’ 45-35 win over OU.  – Daniela Perez

Want more content like this in your inbox every morning?
1958: Darrell K Royal’s first win against Oklahoma

In 1956, a 32-year-old Oklahoma football alum named Darrell K Royal began his legendary tenure at Texas as the coach of a dwindling Longhorns team. Royal’s first season in Austin saw the coach turn Texas around, leading the team to a No. 11 national ranking and a Sugar Bowl appearance. From there, Royal went on to become the winningest coach in program history.

In the hall of fame coach’s 20 seasons with the Longhorns, three teams won national championships and none had a losing record.

One of the most memorable moments from Royal’s career was his first win in the Cotton Bowl against his alma mater and Texas’ storied rival — Oklahoma. In 1948, Royal was quarterbacking for the Sooners. Ten years later, the legend captured his first win against Oklahoma as the Texas head coach in 1958.

The Longhorns won 15-14, putting an end to the series dominance the Sooners had maintained throughout the ‘50s. This would be the first time Royal defeated his former coach and mentor Bud Wilkinson in the rivalry game. For the next five years before retiring in 1963, Wilkinson would lose to his former player-turned rival Darrell K Royal. – Myah Taylor

After a season opening loss to Maryland, it seemed like the 2018 season was going to be another average season for Texas. Heading into the 113th meeting of the Red River Rivalry, the team and fans alike were hopeful the Longhorns could begin to turn it around. That turnaround would end up hinging on one kick.

The score was tied at 45 with 14 seconds left in the final quarter of the game. After an explosive day of offense, it all came down to whether then-freshman Cameron Dicker would be able to make a 40-yard field goal. Was he ready for the moment? Would the weight of the kick impact the young player? Longhorn nation watched, breath held, as he set up for the kick.

The kick split the uprights as Texas fans cheered and Sooner fans hung their heads. Dicker earned Red River immortality with one kick and earned the moniker of “Dicker the Kicker” among Texas fans. It was arguably the highlight of the entire season for the Longhorns and served as the springboard en route to the Sugar Bowl victory. – Wills Layton

The 1994 Red River Rivalry game was a back and forth battle for the ages. But one play, one player sealed the 17-10 Texas win in miraculous fashion.

Here’s the setup: Oklahoma has the ball, down a score with 43 seconds remaining. It’s fourth down and goal for the Sooners at the Texas 4-yard line. Oklahoma had run for 240 yards on the day behind a strong offensive line but had turned the ball over twice.

The ball was snapped, and sophomore tailback James Allen faked a block and looped behind the quarterback from the right side to take a handoff. Allen got outside of the defensive line, then made a cut towards the end zone. For a split second, it looked like he had hit pay dirt.

Then in came Stonie Clark.

The junior Texas defensive lineman came charging down the goal line, and as Allen crossed the one yard line, Clark threw all of his 6-foot-1-inch, 343-pound frame into him. He stopped him dead in his tracks, and the rest was history. The Longhorns would win their fourth of seven over the Sooners in the 1990s. – Marcus Krum

In 2005, the Longhorns went into the Cotton Bowl with revenge on their minds. The Sooners had been the sole blemish on Texas’ record the year before, leaving Texas out of the National Championship game and the Rose Bowl. Quarterback Vince Young famously declared after the one point win over Michigan that Texas would be back the following year. To his credit, Young and the Longhorns delivered on the promise.

Oklahoma came into the 2005 matchup unranked after losses to TCU and UCLA, both of whom were unranked at the time. The Sooners fell out of the top 25 after beginning the season ranked No. 7.

Texas’ win was just another dominant victory on its road to a National Championship. Once Texas running back Jamaal Charles broke off an 80-yard touchdown run, there was nothing left for the Sooners to do except finish with a loss. Oklahoma never led and was outgained by Vince Young alone. – Donavann Smoot