Longhorns attempt to answer the big question: Can they repeat? 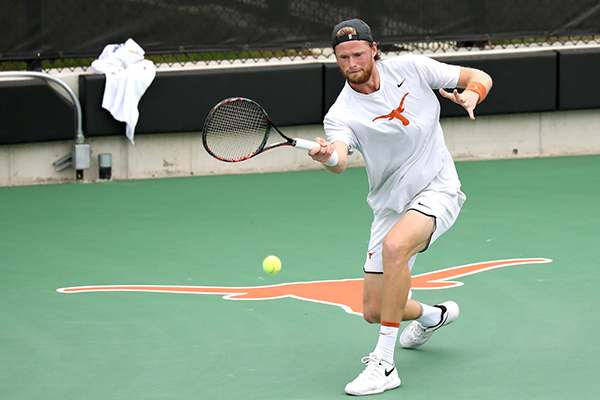 After all the distractions involving former coach Michael Center surrounding the men’s tennis team during the early part of the spring season, the Longhorns defied the odds and captured their first national title after defeating Wake Forest last May.

For head coach Bruce Berque, it has been a long road. The longtime Longhorn assistant was with five programs — one of which won a national championship in Florida during his time there — before settling down at Texas.

Berque is now tasked with steering the ship in the right direction as he deals with the departures of seniors Harrison Scott, Leonardo Telles, Colin Markes, Rodrigo Banzer and Johnny Goodwin. Despite all the talent that has left the team, Berque was able to recruit the top class of incoming freshmen in the country.

This class includes Jacob Bullard, Evin McDonald, Eshan Talluri and Siem Woldeab, and after a redshirt year, Cleeve Harper also joined the freshman class. Berque understands the significance of getting these young men into match play during the fall.

This fall session is also important for the team’s two top players, Yuya Ito and Christian Sigsgaard, who are preseason ranked in the top five at No. 4 and No. 2 respectively. For Ito and Sigsgaard, Berque wants the two seniors to continue to work on their games and is already seeing great signs out of their early season performances.

“There were positives and areas that need attention scattered throughout the weekend, but the most overwhelming positive was Christian’s performance,” Berque said. “He played some really good tennis and provided a great example for the freshmen for the way they’re supposed to carry themselves and compete on the court, so I was happy for him that he had such a strong weekend.”

Texas is hoping that both Ito and Sigsgaard — along with the talented incoming class — can propel the team to a second consecutive NCAA title.