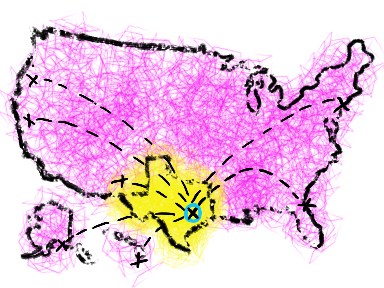 Moving away from home for college is an adjustment for everyone, whether you’re 10 minutes or 10 hours away. Being away from your friends, family and home for a prolonged period of time makes that distance — no matter how far — feel farther.

Although being in college can make you feel disconnected, if you’re from Texas, odds are you have some sort of hometown connection on campus, whether it’s a sibling, a friend or a classmate from your high school. But this isn’t the case for out-of-state students.

I think most of us knew what we were getting ourselves into, but uprooting your life at 18 is easier said than done. Although UT has a broad range of organizations and resources to help students adjust, more than anything else, out-of-state students need a home away from home — and in-state students can help.

Communication sciences and disorders freshman Chloe Proshuto said the transition into college is very different for in-state and out-of-state students.

“For (in-state students), I think it feels like a smaller leap from high school to here because it’s close to home, and it was the natural thing to do,” Proshuto said. “There are so many people who say, ‘I knew I was going to come here my whole life.’”

But if you’re an out-of-state student, you likely don’t have any of those hometown connections that many in-state students enjoy.

If you’re one of the lucky ones, you might have known one, maybe two, people before you got here. Or, if you’re like me, you came here with zero connections within the entire state of Texas. Coming to such a massive school in an unfamiliar place filled with strangers is a bigger feat than many in-state students realize.

“Everyone is sort of entering with at least another person,” said corporate communications freshman Brenna Van Skiver. “When you’re out-of-state, a lot of the time you know absolutely no one. Even having one person makes a huge difference.”

Going home for holidays and long breaks is relatively standard. But having the option to go home on any given weekend? That’s a privilege afforded almost exclusively to in-state kids.

Both Proshuto and Van Skiver said that even though they don’t necessarily want to go home all the time, they wish they at least had the option.

“People will say, ‘My mom wants me to come see her this weekend,’ and I always think, ‘I wish I could see my mom this weekend, but I can’t,’” Proshuto said.

With my family so far away, there isn’t a day that goes by where I don’t feel grateful to have found incredible support systems on campus. I can’t imagine what my college experience would be like if my roommate and her friends hadn’t taken me under their wing.

Van Skiver said a great way to support your out-of-state friend is to extend your family to them if they need it since they don’t really have access to their family in the same way you do.

“I would say my closest thing to a lifeline is my roommate and her family,” Van Skiver said. “My roommate’s mom made a point of giving me her number and taking me under her wing because she knew I was from out of state.”

In my experience, one of the best ways you can do this is by inviting them home with you for a day or a weekend. I was lucky enough to spend a night at a friend’s home just outside the city, and even though it wasn’t my home, I found solace just being in a home.

Extending your home to your out-of-state friend is an act of kindness that goes much farther than you might think, and being welcomed into someone else’s family has made all the difference in making Texas my home.